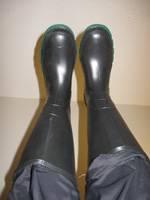 I wanted to know who was doing the dirty work.

The teens that’d volunteered for a July outdoor assignment in New Orleans.

The teens that worked up a sweat because the labor was intense and not simply because the weather was hot.

The teens forced to endure all of Louisiana’s elements.

Those are the teens I wanted to highlight in Youth Gathering stories. If they were going to do all that hard work, the least I could do is watch them. (Tell their story, too!)

Today was the day I met up with Youth Gathering teens an hour south of New Orleans. We drove as far as we could. Then we were taken on a 45-minute ride by other means to the work site.

The teens embraced the mission, though the work was intense and hard.

By the time it was over, I’d never seen muddier teens.

They’d come to help the people of New Orleans and thought they would be building houses.

I’ll tell you what they did in a story I’m writing for tomorrow or Saturday.

We just finished the project and are headed home. I left the work boots I bought for the day behind.

Maybe someone from tomorrow’s Youth Gathering group can use them.

Word on the street | Lutherans unmasked