The first bishop in Mozambique

Philip Knutson is the regional program assistant for southern Africa for the ELCA’s Global Mission unit. He works with companion churches, companion synods and mission personnel throughout southern Africa. 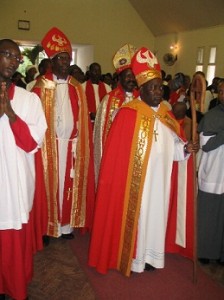 The Rev. Jose Mabasso is the first bishop of the Evangelical Lutheran Church in Mozambique.

On May 1 I was privileged to attend the consecration of bishop-elect Rev. Jose Mabasso in Maputo on behalf of the ELCA.  This is the first bishop of the Evangelical Lutheran Church in Mozambique.   Visit the new Lutheran Communion in Southern Africa website for more information about the Lutheran member churches in the region.

I also recently I received the following report from Mr. Armando Manhisse and would like to share his Easter letter with you.  (Mr. Manhisse is co-ordinator for Renasce Esperança, a project of the Evangelical Lutheran Church in Mozambique involved in various community-based projects, which are supported in part by ELCA Global Mission and ELCA World Hunger.)

Easter 2011 was a historical one in the central region of Mozambique for the Evangelical Lutheran Church in Mozambique (IELM) central District, Sofala and Manica provinces. The Rev. Matsimbe started at the Beira congregation on Maundy Thursday …  by conducting a service with Holy Communion. On Friday he proceeded to the Chimoio congregation where he conducted the Good Friday Service.

After Chimoio, on Saturday, he joined the local evangelist and others from Chimoio who traveled together to Munene where around 200 Christians were waiting, including the baby Martin whose mother had brought him to church for baptism. (The first baby born at the recently opened Martin Luther Clinic in Munune was named Martin by his mother.  The clinic was built with the support of ELCA World Hunger.)

The evening service at the Munene congregation, started after dinner at around 9 p.m., accompanied with singing and dancing up to 12 p.m..  After midnight the Easter Sunday Service began with baptism for 22 children, including the young Martin and nine adults followed by Holy Communion.  The service ended at 5 a.m. Afterwards the delegation proceeded to Macossa, a preaching point near the Munene congregation. In Macossa, Rev. Matsimbe also conducted an Easter Sunday Service with the baptism of children and adults followed by Holy Communion.

On the way back to Chimoio, the delegation had to stop again at Munene for food and some quick visits to the Renasce Esperança project site and the Martin Luther Clinic to see a new baby born at around 10 a.m. on Easter Sunday!

Thank you for your continuing support and prayers for us and for the ELCA Missionary Sponsorship Program.