Signs of the resurrection in Suriname

The Rev. Kevin Jacobson is an ELCA missionary in Paramaribo, Suriname. 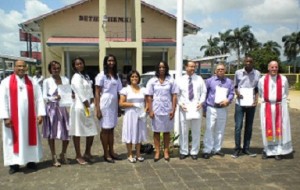 The confirmation class of 2011

Shortly before Easter I read an article by Tomas Munita on The New York Times website.  He described the colorful minibuses on the streets of Paramaribo, Suriname. The minibuses have hand-painted illustrations of the heroes, outlaws, religious temples and musical subcultures of this South American city.

On that same day I was sitting on the side of the road in Paramaribo waiting for a friend.  Of course I was watching the buses go by, but this time I was paying closer attention to what was written on each one.  I saw “Give God all the glory!” “Only God can move me — oh yeah and the mountains!”  “Give God a chance.”

Because it was Holy Week, after some moments my attention turned to another question.  I asked myself, “How might these buses relate to the resurrection?”  That seemed to be a stretch but it got me thinking about Easter.  And soon my question was “What are the signs of resurrection in Suriname?”  When growing up in Wisconsin the signs of spring were the symbols of Christ’s resurrection. But what about in the tropics, in Paramaribo where every day it is hot and humid?

Resurrection — perhaps it could mean the opportunity to sit by the road and observe closely what is passing by?  Could it be that newly painted bus? Could it be the excitement in the voices of the six travelers just getting their U.S. visas to travel with me for 16 days through the Florida-Bahamas Synod and visiting missionary sponsoring congregations and the synod assembly? Could it be in the African mother who wipes off the tears of her daughter after she has just fallen on the curb? Could it be in the bright-red fire lobi, hibiscus, frangipani, inpatients, buttercups that are everywhere all the time in Suriname? Could it be in the three children that were baptized and the 10 students that were confirmed in April in the Lutheran Church? Could it be in the rhythms and singing of the “Brothers in Christ” at our worship services? Could it be in the ice cream cone that I just consumed?

Well now I may be stretching the meaning of resurrection just a little bit. However, all these things bring a smile to my face, lighten up my day and bring freshness in the air I am breathing. It is in the everyday sights, sounds, smells and, yes, tastes that I often take for granted but are the signs of the story of Christ’s resurrection in Suriname.

One Response to 'Signs of the resurrection in Suriname'