Thank you for your support of ELCA Global Mission

The Rev. Viking Dietrich, an ELCA missionary, has been the West African regional representative of the ELCA. He has had responsibility for theological education, evangelism and interfaith dialogue.  He and his wife, Marissa, have lived in Ghana. 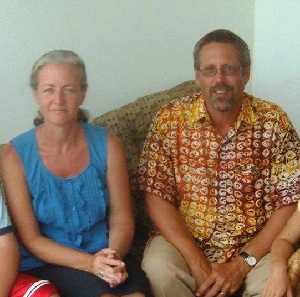 The 21st century will see many changes in the international scene as technology continually binds once distant parts of the world into a more complex web of relationships.  In that global web, West Africa will be central to the vision of the universal church over the next century for two reasons.

First, as the church is changing demographically and growing more and more in the “non-western” areas of our planet. The density of West African Christian population places Nigeria and Ghana at the demographic center of 21st century Christianity.

Secondly, West Africa remains one of the most impoverished and thus marginalized places in the world economy.  (Due to that) we, as members of the ELCA, are compelled to actively participate in the global context and seek new ways of being instruments of God’s redemptive work.

The ELCA, as a whole, has affirmed its commitment to witness and life in the global context.  The churchwide office, when it underwent organizational restructuring in the fall of 2010, retained the Global Mission Unit as one of now only three departments. Also, ELCA synods are developing stronger relationships with companion churches in other countries.  And again, congregations continue to play a major role in the ELCA’s global work through regular offerings (over 50 percent of Global Mission revenue) and also the missionary sponsorship program (over 25 percent  of Global Mission revenue).   ELCA congregations should feel that they own the work and approaches of the ELCA in its global engagement and publish them to their local community.

I pray that you, both individually and as a community active in God’s mission, will support the work of the ELCA globally, particularly in West Africa, even as you support local ministry.