The joys of learning and teaching

Dana Olson is an ELCA Young Adult in Global Mission serving in the United Kingdom. 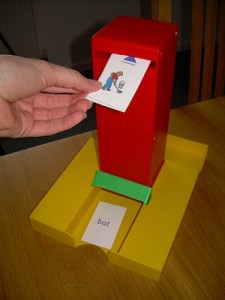 One of the boys I teach graduated from Springboard and I now have a new child, Micah, to teach. He’s also in Year 2, which makes him about 6 or 7.

Although Micah is a sweet boy who will do anything asked of  him, he has a very blank stare and seldom smiles let alone laughs (I had never seen either). Springboard uses a multi-sensory approach to teaching — which includes learning by visual learning (pictures), auditory learning (listening), and kinesthetic learning (movement). I like to incorporate as much kinesthetic learning (movement) into my lessons as often as possible, as I’ve found kids love to move (what a concept!).

Springboard has lots of materials to incorporate movement into lessons. One of them is using the Smart Chute, shown in the picture. You put a card with a picture in the top and then the answer (which is on the opposite side) comes out the bottom. I had used the Smart Chute with Micah a few times — he needed to be able to hear the difference between his short vowels and we were practicing this — and he had no idea how the picture turned into the answer after the card had been placed in the Smart Chute. When we were finished using the Smart Chute, and as I was putting the cards away, I dropped all of them thus revealing that the cards had the pictures on one side and the answer on the other side.

The biggest smile I have ever seen stretched across Micah’s face as he realized how the Smart Chute cards worked. This, in fact, made me smile, but what came to follow melted my heart even more.

Micah was then given two sentences to write. He succeeded in placing capital letters at the beginning of both sentences, placing periods at the end and spelled all of his words in both sentences correctly, all on his own!

After numerous expressionless lessons and thinking the big grin on his face earlier in the lesson was long forgotten, when he corrected his own work and realized he had no mistakes, I could feel his whole being beaming with pride at his perfect work.

Thank you so much for your continued support and prayers.

« Previous Post: Thank you for your support of ELCA Global Mission

One Response to 'The joys of learning and teaching'