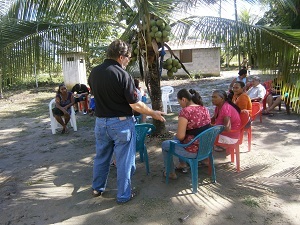 Stephen Deal facilitates an open-air workshop with members of the Espiritu Santo mission in northern Honduras.

Stephen Deal and Marta Giron are ELCA missionaries in Costa Rica. Stephen is the regional representative for Central America. To support Stephen and Marta, or another of the ELCA’s over 240 missionaries in the global church, click here.

At the risk of pushing a metaphor too far, I will open this reflection by referring to the recent World Cup Soccer Championship in Brazil.

You may have heard that Costa Rica’s national selection (known here as the ‘Sele’) created quite a stir. It wasn´t because they finished first; they only got as far as the quarter finals. But that was their best showing ever in the World Cup.

When Costa Rica’s team headed to Brazil in early June, no one gave them a prayer (myself included).  Their first-round opponents were Uruguay, Italy and England – all previous World Cup champions.  Matched against these world soccer powers, few expected Costa Rica to win a match – or even score a goal.

Some joked that Costa Rica (the rich coast) would have to change its name to Costa ‘Pobre’ (the poor coast).  There was a kernel of truth in those jokes since each of Costa Rica’s first-round opponents had a star player (and sometimes more than one) whose annual salary was greater than the salaries earned by all 11 of Costa Rica’s starters put together.

When all was said and done, Costa Rica finished eighth and was one of only three undefeated teams in the 2014 World Cup (the others being Germany and the Netherlands).

How did this happen?  Sports commentators have devoted hours of air time to this topic.  In the end, the consensus seems to be that a key to Costa Rica’s success was the triumph of team play over high-paid, individual stars.

I find a certain parallel between Costa Rica’s success in the World Cup and the changes taking place in the Lutheran churches here in Central America.

As a group, the Central American churches are small, young and resource-poor; they share a commitment to holistic mission in contexts of poverty, marginalization and exclusion where the pastoral demands can be overwhelming.

Being a church of the poor, rather than a church that helps the poor, has its special challenges.  When it comes to finances, Sunday offerings are insufficient to pay a pastor’s salary.

Rarely is it possible for an ordained pastor to serve a single congregation, so multi-point parishes are the rule rather than the exception. Congregations function much of the time without the physical presence of a pastor. How? By taking full advantage of the gifts and talents of lay leadership.

In Central America, there is a growing emphasis on “pastoral teams” where volunteer lay leaders assume the roles that have been reserved for a paid pastor in more traditional church settings – presiding at worship, preaching, teaching, visitation, counseling, etc.

In the ELCA, we call this team ministry. It has its roots in the Lutheran doctrine of the universal priesthood where, by virtue of our baptism, all are called to mission and ministry in the world.

A noteworthy example of this shift from a pastor-centered model of congregational ministry to pastoral teams is occurring in the Honduran Lutheran Christian Church.

Since December 2012, leaders from every Honduran Lutheran congregation and mission point have been constructing a new model for pastoral ministry so that the church can survive and grow, notwithstanding the extremely limited number of ordained pastors that it has now – and can expect to have for the foreseeable future.

I have served as workshop facilitator through-out this process. I spent 10 days in Honduras last December just before home assignment back in the United States. After returning to Central America, I made two additional trips back to Honduras for the conclusion of the process – at the end of March and in early June.

With the input of over 150 active church leaders, the Honduran church has embraced a ministerial model where the multiplicity of pastoral tasks performed by volunteer lay leaders is recognized and valued.

The church has also set priorities for ministry-specific training for lay leaders over the next three years, specifically in the areas of Bible study, Christian education for youth and adults, and music and liturgy.

Our Honduran brothers and sisters were inspired and guided by a passage from Paul’s first letter to the Corinthians:

To each is given the manifestation of the Spirit for the common good (I Corinthians 12:7).

That is to say, all members of Christ’s body – lay as well as clergy – have been given unique gifts and talents.  Ministry isn’t what the pastor does, but rather what all baptized members are called to do when we put our God-given talents at the service of the church and community.

This is a pretty good way of describing the missionary task in today’s world: Recognizing that our gifts and talents are manifestations of the Spirit and that we are called to use them to serve others.  When we respond to that call, regardless of whether the cultural setting is San José, Costa Rica; Tegucigalpa, Honduras; or your congregation’s neighborhood in the United States, we are engaged in ministry and serving as missionaries.

So, my fellow missionaries, thanks be to God for the unique gifts that each one of us has been given.  With the guidance of the Holy Spirit, may we all find our ministry calling – that place where we employ our God-given talents in loving service to our neighbor and in the care of God’s creation.