Brian and Christine Palmer are ELCA missionaries in Liberia. To support the Palmers, or another of the ELCA’s nearly 250 missionaries, go to www.elca.org/missionarysponsorship. 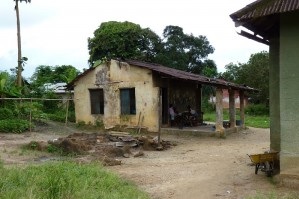 A typical house in Liberia.

Living in a developing country has its challenges. Yet working with people who have similar goals can be not only refreshing but downright encouraging.

We’ve befriended a Peace Corps volunteer who has served in the southeastern section of Liberia at about the same time we came (we’ve been here almost a year) and has relocated to Totota. She loves my espresso and Scottish shortbread fingers I get at the Lebanese grocery store. And what she gives me in return is her altruistic enthusiasm for what she’s doing, her willingness to live simply. She sets a great example for me.

Then there are my two elder mentors Edna and Alvina. Edna teaches in the first nursing graduate program that’s getting off the ground in Monrovia. If she’s not teaching, she’s back at her Zorzor house, way out in the bush. She volunteers her time there as a nurse for the bush hospital and has been a missionary for over six years.

Alvina and her husband raised their children in Liberia while they and a team of translators translated parts of the Bible and educational materials into the various tribal languages. Her husband passed away over seven years ago. She and I have had talks about living here as a woman and as a single woman at that. She misses her husband and confided to me that on his deathbed he encouraged her to continue their work, knowing she wouldn’t be happy doing anything else. God is providing her with the funds to go on. And she is happy doing what she’s doing.

And then there are Dione and Jenny. Dione is a senior at Luther College in Decorah, Iowa, and Jenny just graduated from Luther. On their own they put together this Liberian itinerary, “sold” it to the ELCA short-term missionary board, and even though they’re paying for the trip themselves, are under the umbrella of the ELCA Global Missions. They are spending their summer helping out at the regional hospital working in the pharmacy just because they want to help out. Very impressive.

The list of people in “The Network” goes on and on. Even though living here has its daily challenges, it is very much balanced by this network of people the Lord graciously is using to offset the hardships. Their lives give me hope, strength, and a future in Liberia. I’m thankful.