Letting the light shine in Linguere

Dirk and Sarah Stadtlander are ELCA missionaries in Senegal. To support the Stadtlanders, or another of the ELCA’s nearly 250 missionaries, go to www.elca.org/missionarysponsorship. 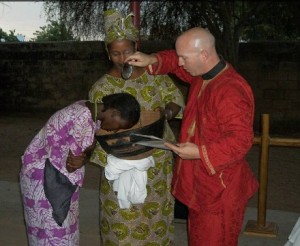 Fatimata Ba, Aminata Ba, and Dirk at the Pentecost worship. Afterwards, as we welcomed Fatimata with song, Aminata danced with the wooden bowl, which is a Fulani “milk pail” now being used as a baptismal font.

Easter and Pentecost celebrations have been particularly exciting this year in the Linguere parish. At Easter, four young boys were baptized during the service. Three of them were the sons of a Christian man who is part of a team translating the Hebrew Bible into Pulaar. Preparation for baptism involved an open and frank conversation between Dirk, the ELS evangelist based in Linguere, Oumar Diallo, and the boys’ mother, a practicing Muslim. She agreed to the baptism but said she wasn’t ready for her baptism because of familial pressure. The fourth boy was Oumar Diallo’s grandson, who is being raised by Oumar and his wife.

A young woman named Fatimata had shown interest in Christianity after working for a Christian couple. She came to church, Bible study and prayer regularly. Oumar Diallo led her through baptismal classes. Oumar made contact with her family, helping them understand the new faith Fatimata was living. Some of the family even came on Easter to witness the baptism service. Fatimata was baptized seven weeks later, during the Pentecost service.

It is exciting and uplifting to see the people of the Linguere parish reaching out and living as witnesses to their Muslim neighbors, friends and family. We pray that events like Fatimata’s baptism will encourage them to continue to let their light shine in Linguere. We also pray for new Christians like Fatimata, that they will be strengthened in their faith and encouraged by the community into which they have entered.