Here’s an update from Dr. Jim and Carolyn Brown, ELCA missionaries in Cameroon. Jim is surgical program director at Ngoundere Protestant Hospital, which is part of the health care system overseen by the Evangelical Lutheran Church in Cameroon, Carolyn is a recovery room nurse and oversees a benevolent fund, which provides money for patients who cannot pay for their care. 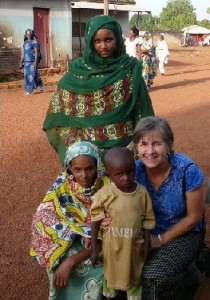 Ibrahima is a 3-year-old boy who came to Ngaoundéré last summer with a huge abdominal mass.  He was sent from here to the pediatric hospital in Yaoundé where he received an ultrasound. His family spent all their money, but he got no treatment.  His father brought him back to Ngaoundéré, and from here to Dr. Elisabeth Neier at Ngauobéla, where she treated him with chemotherapy for a Wilms tumor of his kidney.

At first Dr. Neier was reluctant to treat him since his tumor was so far advanced.  But he responded dramatically, and during our trip to Ngaoubéla in December Jim was able to remove the malignant kidney. After more chemotherapy, he is now doing very well.

We have written before about Hadidjatou, a 27-year-old woman whose first and only pregnancy at age 15 resulted in a dead baby and a vesicle-vaginal fistula, so that for 12 years she leaked urine constantly. As is often the case with these women, her husband divorced her.

She had an unsuccessful surgery in Nigeria before coming to Ngaoundéré in 2009. Jim tried twice to repair the fistula before realizing that she had had more than one injury, and she continued to leak from a site near the outlet of her bladder.

In December Dr. Danki, a Cameroonian urologist who trained in Germany, joined the staff at Ngaoundéré. He brought with him state of the art diagnostics for urology and was able to identify the exact location of the remaining fistula, which Jim could not see with our previous cystoscope.

Hadidjatou has had the first stage of her repair done and is doing well.  It gives us great joy to see women who have suffered for so long be given hope, and,in many cases, their very lives back.

We could tell many more stories of the patients who have been helped by your support of us. Patients like Ibrahim and Hadidjatou are examples among hundreds of others.

Together in mission,
Jim and Carolyn

Next Post: Students in the Holy Land enjoy spring »