Bradn and Natasha Buerkle are ELCA missionaries serving as pastors in Novosibirsk, Russia. To support the Buerkles, or another of the ELCA’s 230 missionaries, go to www.elca.org/missionarysponsorship. 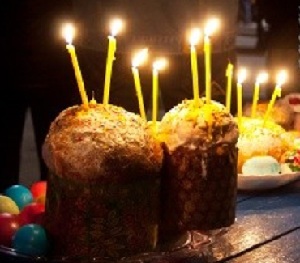 Kulachy is a special Easter food in Russia.

The Orthodox Church celebrated Easter a week later than the Western Church this year. Nearly every year (insofar as the church calendars only rarely coincide) I mourn at the lack of a unified witness in the  celebration of Christ’s resurrection. At the same time, I try to make the best out of the situation, knowing that most of the people in our congregations will, in one way or another, celebrate Easter twice — and it’s hard to argue with that.

There are a number of unique characteristics of the Easter season in Russia. Special foods are prepared, like “kulachy.” They are blessed in front of churches or in supermarkets on Easter or in the days immediately before. The main service in the Orthodox church is a beautiful Easter vigil filled with lots of liturgical “special effects” — the clergy make two changes of their vestments, the church goes from dark to light, there is a special procession around the church filled with everyone singing “Christ is risen from the dead / trampling down death by death / and upon those in the tombs restoring life!”  The Easter night service is broadcast on national TV stations. This year, as usual, major politicians took a prominent place at these services, though this year many are criticizing the church for its obvious moves towards strengthening its financial and political position.

Yet for those who call the Orthodox Church their home, the whole week after Easter is special. During “Bright Week” (and only during this week throughout the entire year) the doors of the iconostasis, separating the sanctuary from the altar, are left open. This represents the stone rolled away from the tomb.  More than anything else the week after Easter is a time of joy — there’s no fasting, there is much singing and, as I’ve noticed this year, a whole lot of bell-ringing. During this week the Orthodox church opens up its bell towers for anyone who wants to try to be a bell ringer.

A recent news report said that as many as 35,000 people attended Easter services. That is wonderful! Yet, given that our city has just passed the 1.5 million mark in population, there is clearly still much to do in order to reach people with the good news of the resurrection.