One of the lucky ones

Posted on May 1, 2012 by Global Mission Support

The ELCA Malaria Campaign is seeking to expand its work to Liberia, where 30 percent of hospital deaths are from the disease. The campaign is already at work in 10 African countries, where malaria kills a child every 45 seconds. You can donate to the campaign at its website. Deborah Troester, an ELCA missionary with her husband, Joseph, in the Central African Republic, gives here her perspective on the deadly but preventable disease. To support the Troesters, or another of the ELCA’s 230 missionaries, go to www.elca.org/missionarysponsorship. 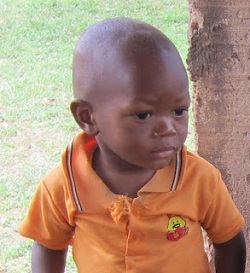 The ELCA is already working here in the Central African Republic to combat malaria. Two rural clinics and a village health program provide malaria education and treatment. The story of little Agrippa (named after King Agrippa in the New Testament book of Acts) is typical. At 14  months, Agrippa had already suffered numerous bouts of malaria. After several illnesses, many people develop partial immunity to malaria, but the parasite remains in their blood, where it continues to destroy red blood cells. Without enough red blood cells to transport oxygen throughout the body, the victims often die – especially infants and small children, who are more susceptible than adults.

In Agrippa’s case, the malaria parasite had destroyed over half of his red blood cells and left him vulnerable to possibly fatal anemia. Fortunately, his mother took him to the Emmanuel Health Center, a project of the Evangelical Lutheran Church of the CAR, with sponsorship from the ELCA, Global Health Ministries, Lutheran Partners in Global Mission and other donors. There Agrippa received a life-saving blood transfusion and treatment to kill the remaining parasites in his blood.

Many children here in CAR aren’t as lucky. They live in small villages with no medical facilities and no one to take their photos or to hear their stories. I happen to know about Agrippa because his father and mother are my students at the Lutheran seminary here in Baboua. In a country where thousands of babies and children die needlessly every year, it’s nice to know of one baby who will live. Please consider helping with the ELCA Malaria Campaign.