Posted on October 1, 2010 by Global Mission Support
Consider sponsoring an ELCA missionary like Ally Streed.  To facilitate the possibility of a missionary visit,  sponsors are matched with missionaries with a geographic connection.  Ally Streed, for example, is recommended to sponsors from the Southwestern and Southeastern Minnesota synods.  To be matched with a missionary in need of sponsorship, e-mail globalmissionsupport@elca.org or call 800-638-3522, ext. 2969. –Sue Edison-Swift 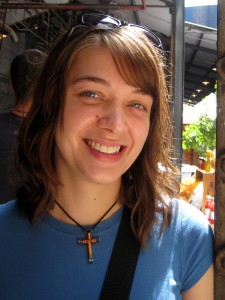 Ally Streed is an ELCA missionary serving in Japan.

“Inscribe our hearts with justice; your way–the path untried;
your truth–the heart of stranger; your life–the crucified.”
(from the hymn, “Let Streams of Living Justice,” Evangelical Lutheran Worship, 710)

Greetings from Owatonna, Minnesota!
My name is Ally and I’m a 23-year-old Owl City fan.  In May 2009, I graduated from Augsburg College with a double major in Spanish and Youth and Family Ministry.  I also played violin in the orchestra and participated in various Campus Ministry activities both on and off campus. Why Japan?  Well, despite my familiarity with the Spanish language, I felt called to apply for the ELCA’s 3-year program in Japan. This probably came from the deep fascination that I have had with the culture and people of Japan since I was in junior high school.  I’m very excited and thankful for the opportunity to work for and with the Japan Evangelical Lutheran Church and to learn and grow together in faith and love.  Now all I have to do is pack.

Greetings from Hatogaya City, Japan!
I’m still Ally, but now I’m a 24-year-old living in an apartment in a suburb of Tokyo. Two other women and I arrived in Japan on September 28th, and have been spending the week unpacking our few belongings, exploring Tokyo via the trains, and meeting all the nice Lutherans that work at the Japan Evangelical Lutheran Church headquarters and at the Japan Evangelical Lutheran Association.  It’s been a great week with a lot of discoveries and learning experiences. Tonight at the seminary in Tokyo, we’ll be worshiping using the Holden Evening Prayer (it’s my favorite!) and I’m really excited that such a wonderful worship tool is being used abroad.  Thank you again, from the bottom of my heart, for this wonderful opportunity.