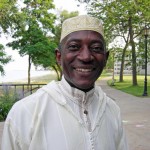 CHICAGO (ELCA) — Williboard “Willie” Langdji embodies ecumenism. He is Catholic working on behalf of Lutherans among large Muslim communities. As a regional representative of the Evangelical Lutheran Church in America (ELCA) in West Africa, Langdji is comfortable talking about and strengthening faith, while helping to support communities in unique ways.

From 2000 to 2009 Langdji was based in Linguere, Senegal, working among the Fulani people — a large, traditional Muslim community in West Africa. Langdji’s work involved projects in agriculture and milk production.

“We crossed the local cow with American, European Holstein cows or Jersey bulls,” said Langdji. “Our results were very good. The cross-breed yields more milk than the local breed.”

“A family went from producing a few liters of milk a day, maybe one liter a day in the dry season, to as much as 10 liters of milk a day. You can see the impact this has from a nutritional point of view, as well as economic — families have more milk to eat and surplus to sell,” he said.

The project is also very good ministry, said Langdji. “It helps provide for the basic needs of people and offers an opportunity to engage with people in their daily lives. We were dealing with people’s culture, life, health and whole family. It is a good starting point to engage people in conversation, which can move into theology, personal beliefs and more.” For Langdji, holistic ministry and witness in word and deed go together.

When the opportunity surfaced, Langdji said he asked many questions among the Fulani people about their work and faith life. “I asked, ‘Why are you doing this?’ The response was simple. ‘We are called to do this work.’ One thing to understand about the Fulani is that they are traditional Muslim people. Our work was an example of Christians and Muslims working together, an important aspect of ministry.”

The engagement between Lutherans and the Fulani people, particularly in Linguere, has existed for some time and continues, said Langdji. “We now have an ELCA pastor working here,” he said.

“I’ve had contact with Muslims and people of other faiths since I was a kid,” said Langdji, who grew up in Cameroon. “In my childhood village there was a sizeable Muslim community. I grew up with Muslim kids, but I never had the opportunity to share my faith with them.”

Serving as an ELCA missionary in Central African Republic and Senegal, and now as an ELCA regional representative, has been “good for me. It has given me opportunities to understand my faith more, grow in my faith and get to a point where I feel comfortable talking about Jesus and (sharing) something that I trust and believe. That has had a positive impact on my faith. And I hope this will be helpful to others,” he said.

Langdji works with his wife, Anne Ruedisili Langdji, and the Rev. Viking E. Dietrich, an ELCA pastor. All three serve as ELCA regional representatives in West Africa — Dietrich’s work focuses on theological education, evangelism and interfaith relationships. Anne Langdji’s work focuses on health ministries, and Willie Langdji’s work centers on development and capacity building. Together they work to foster church-to-church relationships between and among the ELCA and Lutheran churches in Cameroon, Central African Republic, Liberia, Nigeria, Senegal and Sierra Leone.

The three ELCA regional representatives also work with other religious organizations, such as with the Joint Christian Ministry in West Africa and the Good News Theological College and Seminary in Ghana.

Since July 2009, Willie and Anne Langdji have been based in Cameroon. They will continue to travel across West Africa to learn more about Lutheran churches and ministries, and interpret their learning to ELCA constituencies.

The ELCA has more than 225 mission personnel in 50 countries and 13 regional representatives serving around the world.