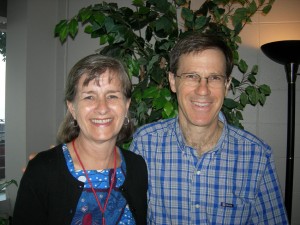 “Only 1 percent of the world’s surgical workforce is in Africa, yet Africa has the greatest surgical burden of any part of the world,” said Brown.

“There are millions of people in Africa who cannot get access to any surgical care, even the most simple life-saving treatments like C-sections or repairing hernias and open fractures. These are done every day in the United States. but many people in rural Africa have no access to these kinds of care,” he said, “and they die or suffer because they can’t get treated.”

“We see a lot of horrible things, lots of death that could have been prevented with timely intervention or resources,” said Brown.

But there are “stories after stories of times when people get well that we knew was not about us,” he said. “I mean this very literally. We see God do things that we know are so far beyond our experience and capability.”

Brown and his wife, Carolyn, are missionaries of the Evangelical Lutheran Church in America (ELCA). Jim serves as surgical program director at Ngaoundéré Protestant Hospital — a hospital of the Evangelical Lutheran Church of Cameroon. He also trains surgeons from throughout Africa through the Pan-African Academy of Christian Surgeons (PAACS). Carolyn is a recovery care nurse and wound consultant. Together they work to treat patients and train African doctors and nurses.

The Browns are members of the Presbyterian Church in America.

“About 90 percent of women in rural sub-Sahara Africa who need a C-section can’t get one,” said Brown. He said many of the women who arrive at the hospital have labored for days in their villages. “Often the baby is dead or partly delivered,” he said. “There are so many other terrible conditions that people live with here that are hard for us (in the United States) to imagine.”

“I often say that only 20 percent of what I practiced in the United States is what I practice here. The other 80 percent I’m learning as we go,” he said. “Almost every day I find myself saying, ‘I’ve never seen that before’ or ‘I’ve never done that surgery before.’ Not infrequently I’ll take the book literally into the operating room and read about what I need to do.”

Brown said there are very few places in Cameroon to refer patients, calling the referral center a myth. “We are the referral center for a large part of northern Cameroon and parts of some adjacent countries,” he said, adding that patients who can afford to travel to Yaoundé, the capital of Cameroon, for care are not guaranteed treatment.

“We are also often in that dilemma of ‘can we do this’ and ‘can we do this safely.’ It takes a lot of judgment to accept the fact that nothing can be done or to give it our best try,” he said.

Despite some of the heartbreaks in patient care, Brown said he finds hope in training African doctors to become surgeons.

“There are a lot of people alive today who wouldn’t be alive if we weren’t there,” said Brown.

There are six PAACS training sites in Africa, and 18 residents have graduated from its other surgical programs. All 18 are still serving in Africa, said Carolyn Brown. She said that of the current residents at the Evangelical Lutheran Church of Cameroon’s Ngaoundéré hospital, one is from Cameroon and the other is from the Democratic Republic of the Congo.

In addition to training nurses at Ngaoundéré, Carolyn participates in the work of distributing a benevolent fund used to pay hospital expenses for patients who cannot pay for services. She said the hospital is completely run by Africans. The hospital relies on income from surgery and other patient care services to stay solvent.

The residents under Jim Brown’s tutelage come from Cameroon and other parts of the African continent. Brown said it is his hope that, once trained, surgeons will return to their home country and make a difference.

It is important that the residents receive a very broad surgical training, because many of them may be working in settings where they will be the only surgeon, he said.

“One of our greatest joys is seeing residents begin to think differently, go to the bedside and conduct a formal evaluation, think in terms of differential diagnoses and evidence-based medicine instead of doing what they saw someone else do at another hospital,” he said.

In his work Brown has learned to rely more on God. “There are so many times when what we do just falls apart, and we have a lot of heart-breaking things that it’s almost impossible to watch,” said Brown. “If you don’t believe that God is sovereign, that God is good, you could easily despair, you could easily give up. If I weren’t convinced that God has called us to do this work at this time, I couldn’t do it. It’s too hard.”

Carolyn Brown said watching her husband struggle sometimes “is hard for me. I help him, but there comes a point where I can’t do anything else but pray.”

“God has given us both a passion for health care and for teaching,” said Jim. A good part of what is shared is “God’s love,” Brown said. “I wouldn’t want to be anywhere else right now. There are so many amazing, wonderful things that do happen, like establishing relationships and living and sharing with people here. It’s real.”

The Browns are not sure how long they will stay in Cameroon. “It is open-ended,” he said. “But as long as the country is stable and the program is viable and we can maintain it, we plan to stay.”

The ELCA and the Evangelical Lutheran Church of Cameroon (ELCC) are members of the Lutheran World Federation, based in Geneva. Based in Ngaoundéré, the ELCC has 215,000 members in 1,350 congregations.

“The Browns are a powerful model of how ELCA missionaries, global companions and missionary sponsors work together hand-in-hand to do God’s work,” said the Rev. Twila K. Schock, director for ELCA Global Mission Support.

The ELCA has more than 225 mission personnel in 50 countries serving around the world in a variety of roles. Mission personnel are supported by individuals, congregations and others such as the “Women of the Prairie Coteau Conference” — a Women of the ELCA conference in northeast South Dakota.

Every three months the Browns receive a $1,700 check for missionary sponsorship from the conference’s “Runner’s Club,” a women’s group from LaBolt, S.D.

The Club has sponsored ELCA missionaries for the past 15 years with a giving total of nearly $100,000.

About 21 Women of the ELCA congregational groups give to the Runner’s Club, according to Linda Anderson, the Club’s treasurer. She said the Club was founded 39 years ago by Vavi Amodt of New Effington, S.D. Amodt encouraged women to wear stockings with a “runner” in them to women’s meetings and Bible studies and donate the cost of a new pair of hosiery to sponsor mission work.