Why the Confirmation of Judge Ketanji Brown Jackson Matters

by guest blogger Judith E.B. Roberts [about the author]

I share this blog from my personal perspective as a Black woman in America and what the confirmation of Judge Ketanji Brown Jackson means to me. 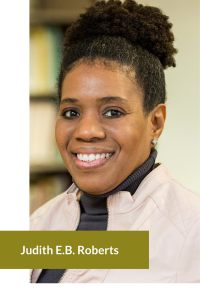 When we consider diversity, we consider that we are all complex individuals with differing lived experiences and social identities, such as our race, ethnicity, gender, age, sexual orientation, ability, religion and socio-economic status. These aspects of our identities are inextricably linked and shape the ways we view the world. Legal scholar Kimberlé Crenshaw first coined the term intersectionality to help explain the oppression experienced by Black women. Crenshaw explains: “Recognizing that we all carry many identities that come with varying levels of power and privilege is called intersectionality.”

Justice Ketanji Brown Jackson represents more than just her accomplishments in the legal realm. Her melanin-rich complexion and natural textured locks speak volumes. This is relevant because historical, deeply rooted racist and sexist views about Black women—views that began with the enslavement of African people—still persist today. Attitudes about the behavior of Black women continue to be represented in media and entertainment by negative caricatures, such as the subservient mammy, the sassy sapphire, the seductress jezebel and the welfare queen. White European beauty standards of fair skin, sharp facial features, straight hair and slender body frames are still culturally and globally dominant. 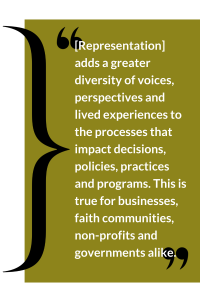 Given all these realities, representation matters. When people from historically marginalized groups see leaders who resemble them in key positions, it builds self-esteem, especially for younger people. Representation fosters greater trust within systems and institutions. It also adds a greater diversity of voices, perspectives and lived experiences to the processes that impact decisions, policies, practices and programs. This is true for businesses, faith communities, non-profits and governments alike.

While Justice Ketanji Brown Jackson is neither the first person of color nor the first woman of color to serve on the U.S. Supreme Court, she is the first Black woman. As a Black woman in America, she bears the lived experience of the intersectionality of race and gender from a very particular historical perspective. Judge Ketanji Brown Jackson represents, in the words of Dr. Maya Angelou’s poem Still I Rise (1978), “the dream and the hope of the slave.” As the daughter of parents who fought against Jim Crow segregation, and as the newest member of the U.S. Supreme Court, Judge Ketanji Brown Jackson represents the best ideals of American democracy and the values of equity, inclusion and diversity. She carries the historical knowledge of laws, policies and practices that held Black Americans in the position of second-class citizenship. Now she will serve from the very bench that overturned racially unjust laws in this nation, from Jim Crow segregation to voter disenfranchisement and school segregation. 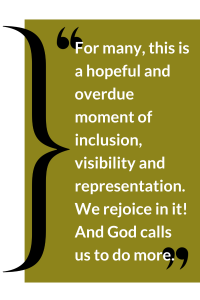 For many, this is a hopeful and overdue moment of inclusion, visibility and representation. We rejoice in it! And God calls us to do more. We are not yet a nation that fully reflects and represents all the gifts of diversity. We must not waiver from the commitment of forming a more perfect union. As the ELCA, we too cannot waiver in our quest to increase diversity within congregations, synods and the churchwide organization.

We can notice the people, voices and experiences that are missing from our programs and our leadership. We can support a culture and climate where all people are free to bring their most authentic selves to work. We can expand and share power and voice in decision-making authority by listening to and following the lead of historically marginalized groups. To counter the narratives of negative stereotypes, we can engage in unconscious bias and other Diversity, Equity and Inclusion (DEI) trainings both internally and externally. We can intentionally recruit, retain and support leaders that represent historically marginalized groups. We can each champion justice by putting the values of diversity, equity and inclusion into our daily practice because representation matters.

ABOUT THE AUTHOR: Judith E.B. Roberts is Senior Director of Diversity, Equity, and Inclusion with the ELCA