The announcement of the Biden administration of an end date for Title 42 is a welcome step forward towards restoring access to the right to seek asylum. Rather than promote a safe, orderly or humane process, Title 42 wound up increasing risk and vulnerability. Our Lutheran tradition teaches “hospitality for the uprooted is a way to live out the biblical call to love the neighbor in response to God’s love in Jesus Christ” (ELCA social message on “Immigration,” pg. 3). The human repercussions of Title 42 will be felt for years to come. Hopefully this moment can redirect our policymakers towards rebuilding a humane asylum system. 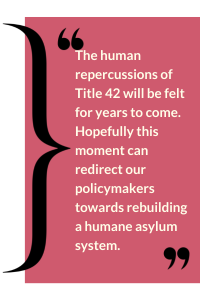 Asking for asylum at the border is a right guaranteed under the Refugee Protection Act of 1980, as well as a right widely recognized as a U.S. international obligation. It is a lifeline many vulnerable migrants rely on when they reach ports of entry, usually as a last resort and after having travelled hundreds of miles by foot to escape personal danger. An asylee is an individual who meets the international definition of refugee – a person with well-founded fear of persecution for reasons of race, religion, nationality, political opinion or membership in a particular social group, who has been forced to flee his or her country because of persecution, war or violence. In the United States, asylum seekers apply for protection from inside the country or at a port of entry.

Title 42 is a part of an U.S. public health code that authorizes the federal government to take “emergency action” to prevent the spread of communicable diseases, a power first invoked by President Trump in March 2020. The Centers for Disease Control and Prevention (CDC) issued an order under Title 42 barring certain noncitizens arriving at U.S. borders, even over the objection of leading public health officials in the CDC who saw no valid public health rationale to issue the order.

The public health effectiveness of this measure is questionable. In the United States, community spread was far more likely to be the source of transmission than newcomers. During the time Title 42 has been in effect, millions of people have continued to legally cross the U.S.-Mexico border at ports of entry for tourism and work. People continue to travel to the United States and to foreign countries by plane with little fanfare. Some have argued that Title 42 authority has been used far beyond its intended use as a public health measure.

WHAT IS HAPPENING NOW 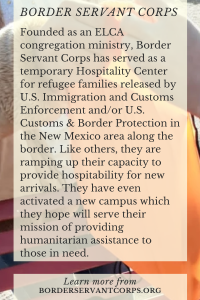 On April 1, the CDC officially announced May 23 as an end date for Title 42. A potential increase in the number of border encounters is anticipated with this policy shift due to demand and expected seasonal fluctuations.

The Department of Homeland Security (DHS) released a comprehensive strategy in anticipation of the expected high volume of arrivals as Title 42 ends. The strategy is a blueprint for ramping up operational capacity, deploying more staff and resources, creating new processing centers and making asylum processing more efficient. The United States is also preparing a new system of adjudicating asylum decision. Of note, it advances an integrated regional approach to migration management. Unfortunately, it relies too heavily on raising the costs of migration instead of working to address the underlying drivers of migration.

Migrants, advocates in the faith community and public health experts have exhaustively argued that restoring asylum and protecting public health can be done together. The U.S. has the ability and resources to welcome humanely, efficiently and safely. Welcoming people in need of refuge is woven into the U.S.’ national identity. Lutheran experience in the United States reflects the continuity of this movement, as at one point after World War II one out of every six Lutherans was a refugee.

The bluntness of Title 42 underlines the U.S. immigration system’s penchant for neglecting human dignity and deflecting responsibility for humane border management. Its uneven use calls into the question even the public health rationale it purported to have. “Too often we perpetuate the racism, the fear of, and the animosity towards newcomers that show themselves in our society,” reads the ELCA “Immigration” social message (pg. 1). Between March 2020 and March 2022, Title 42 was used over 1.7 million times to expel migrants back to Mexico by land and by plane to Guatemala, Honduras, El Salvador, Haiti, Brazil and Columbia.

Even now, Congress is considering an amendment to a COVID-19 supplemental bill that would reinstate Title 42. Historically, exclusionary policies have been most pronounced during moments of social anxiety. However, the choice is not to double down, but to reach out with grace and work towards the common good. Martin Luther once said, “I will give myself as a kind of Christ to my neighbor, just as Christ offered himself to me. I will do nothing in this life except what I see will be necessary, advantageous, and salutary for my neighbor, because through faith I am overflowing with all good things in Christ” (The Freedom of a Christian, pg. 29).

There many reasons Title 42 exacerbates human suffering. A paper by the UN’s International Organization for Migration (IOM) underscores how long-term measures to close borders only reduce options for safe and regular migration and may increase the likelihood of irregular migration, smuggling and trafficking, especially as the drivers of migration increase. 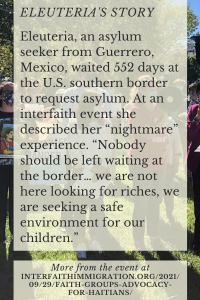 Crossings have turned increasingly deadly as migrants have attempted to enter without inspection outside of ports of entry. A June 2021 report by the Government Accountability Office (GAO) also acknowledged that Title 42 expulsions have led to “some individuals trying to cross the border multiple times per day.” Owing to the exception for unaccompanied children, the use of Title 42 has also driven families to separate in the desperate attempt to send their children to safety in the United States. No family should ever have to make such a tragic choice.

Migrants are exposed to extraordinary danger upon return. Human Rights First published a report identifying 9,886 reports of kidnapping, torture, rape and other violent attacks on people blocked or expelled to Mexico due to the Title 42 policy. In Mexico, stranded Black migrants and migrants of African descent reported frequent racially motivated attacks and harassment.

According to the IOM the vast majority of Haitians were returned to “highly vulnerable situations with few if any resources” to Haiti, a country most had not lived in recently or at all. Returned and deported migrants to Guatemala and Honduras were equally vulnerable. Some NGOs, including ELCA AMMPARO companions Asociacion Pop No’j and the Mennonite Central Action Committee in Honduras, were able to assist, although COVID-19 set-backs and the sheer scale was considerable.

Legal scholars have continuously called into question the validity of the CDC’s order, given that it supersedes congressional intent by granting the CDC near unilateral power to decide who can be deported. At a minimum, Title 42 is not consistent with U.S refugee law or treaty obligations under Article 33 of 1951 Refugee Convention. Article 33 prohibits expulsions back to countries where a person’s life is in danger (what’s known as a nonrefoulement obligation). The United States ratified the 1967 Protocol Relating to the Status of Refugees, creating an obligation back to the 1951 Refugee Convention. At least two high-ranking government officials have resigned over the categorical expulsions they saw as inhumane and illegal, especially to the country of Haiti. The prevailing international standard on deportations prohibits collective expulsion back to danger and urges a dignified returned and reintegration process (Objective 21 of the UN Global Compact for Safe, Orderly, and Regular Migration).

Huisha-Huisha v. Mayorkas challenges the overall use of Title 42 to return families back to danger. The D.C. Circuit Court on March 4, 2022 ruled in Huisha-Huisha that the government cannot use the public health order to expel families back to countries where they are likely to suffer persecution or torture. The Huisha-Huisha ruling dropped just as district court in Texas issued another ruling on Title 42 in Texas v. Biden blocking the ongoing Title 42 exemptions for unaccompanied children. The Biden administration averted having to expel unaccompanied children by officially terminating Title 42 expulsions for unaccompanied children on March 21. The UN High Commissioner for Refugees condemns any measure that infringes on the right to ask asylum. Public health experts argue that evidence-based public health safeguards like the use of vaccines, masks, hand sanitizer and other screening tools are strong countermeasures so that Title 42 is not necessary. 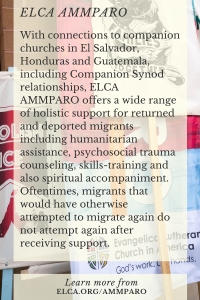 On the other hand, following the CDC order terminating Title 42 by May 23, the states of Missouri, Arizona, and Louisiana jointly sued the Biden administration for failure to rescind Title 42 through the proper procedure. While governing authorities have the responsibility to protect the nation’s borders and maintain its security, Title 42 goes too far.

Soon, the U.S. Supreme Court is expected to hear a case over the Biden administration’s rescission, or repeal, of the Migration Protection Protocols (MPP). MPP, known as “Remain in Mexico,” leads to people who are legally seeking protection being stranded in perilous conditions in Mexico while they await their court hearing. MPP deprives migrants their opportunity to have their cases fully and fairly considered. This is a deeply flawed program that exposes children, families and vulnerable migrants to serious harm.

The experience of Title 42 shows that the solution to human struggle and migration is not deterrence-based mechanisms, but addressing the drivers of migration, creating safe and orderly pathways to migrate, strengthening access to protection, and retooling how the government provides reception for those who are forced to come to the border. Any strategy must not bank on deterrence at U.S. borders or even within countries of transit to mitigate the flow of people migrating to save their lives, in search of opportunity or to reunify with family. International coordination and collaboration are essential for any effective migration policy.

Our faith is the strongest compass we have for guidance on how to treat newcomers. Scripture calls us to love our neighbor: “The alien who resides with you shall be to you as the citizen among you; you shall love the alien as yourself, for you were aliens in the land of Egypt: I am the Lord your God” (Leviticus 19:34). ELCA social teaching describes our serving presence in society that “holds power accountable, advocates justice, stands with those who are poor and vulnerable, provides sanctuary, and meets human needs” (ELCA social statement For Peace in God’s World, pg. 5). 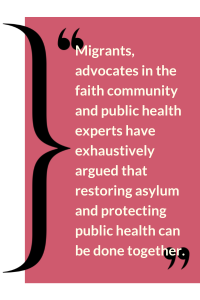 We must continue to show support for restoring access to asylum and continuing the U.S.’ legacy of providing refuge as consistent with U.S. law and international agreements. Some lawmakers support keeping Title 42 over concerns about border security. People’s lives cannot be used to escalate reliance on detention, deportation and border militarization, or to try to dismantle the asylum and refugee system.

While lawmakers will likely never reach a consensus on what a secure border looks like, we can agree that essential immigration reforms must be made – and Title 42 proved to be an unjust and harmful policy. Beyond just denying access to asylum, Title 42 engenders the conditions for an even greater humanitarian crisis at the border and in countries of origin. Communities of faith, through ELCA AMMPARO and across the ELCA, are ready to work together to address the plight of migrants.

Lutheran congregations have responded to newcomer neighbors, welcoming people fleeing conflict in Southeast Asia, war, targeted violence in Central America and very recently have welcomed Afghan families displaced by conflict and Ukrainians in Eastern Europe. This love of our neighbor is our steady guide in uncertain and difficult times.