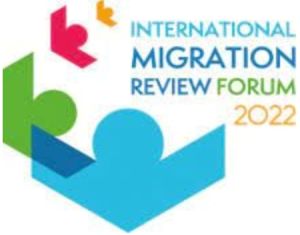 Voting integrity and access to the ballot are major concerns in Arizona, so it stands to reason that LAMA’s Policy Council determined Civic Engagement would be a policy priority for 2022. After nearly 130 voting-related bills were introduced in the Arizona legislature, dozens survived crossover week and have had or will have hearings this session. LAMA is partnering with Arizona Faith Network (formerly Arizona Ecumenical Council) on voter legislation and registration this year.

In other news, LAMA continues to introduce LAMA and the importance of Lutheran advocacy to our Grand Canyon Synod congregations. This month included kickoff events at Desert Cross Lutheran in Gilbert, AZ and Esperanza Lutheran in Ahwatukee, AZ. LAMA also participated in a forum on Refugee Resettlement with Lutheran Social Services of the Southwest at Ascension Lutheran in Paradise Valley, AZ where, in addition to the presentation, panelists fielded many questions about the refugee crisis in Ukraine.

LEGISLATIVE SESSION IN FULL SWING: As the Colorado General Assembly moves ahead to the midway point of its 2022 session, Lutheran Advocacy is actively working on a host of bills related to our 2022 Advocacy Agenda. Among our top priorities this session: 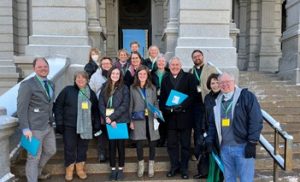 LUTHERAN DAY AT THE CAPITOL A SUCCESS: Despite a winter storm hitting the Front Range the night before, we still carried off our Lutheran Day at the Capitol on February 17 with a successful hybrid event. In-person attendees braved the slick roads to gather at St. Paul Lutheran Church in downtown Denver, while even more attendees joined on Zoom, to hear theological grounding for our advocacy, a briefing on the issues confronting the legislature this year, and training for citizen lobbying & advocacy.

We held our annual Interfaith Invocation the morning of January 13 – this was our first in-person event since 2020.

KIFA Advocacy Days were held Feb. 15-17; the first day was in-person and the second two were virtual. Thirty-five people (mostly clergy) attended the in-person day. Highlights included legislative meetings and a “Teach the Truth” rally at noon, which got excellent media coverage. Highlights of the virtual days included a keynote address by Rev. Jacqui Lewis of Middle Collegiate Church in New York, as well as an evening “Prayer Vigil for Grief, Justice and Hope.”

We have testified on over 10 bills and have sent out five action alerts to our supporters (so far!). We are part of coalitions on voting rights, redistricting and clean energy, as well as the Teach the Truth coalition that KIFA leads.

The session will adjourn on March 31.

Legislative Session: Bills are moving quickly through House committee hearings. In the Senate, leadership has been slow to offer budget targets to committee chairs. Being so far behind could result in little time for Senate hearings and mean most big items get negotiated by a small group of House, Senate and Administration leaders.

Surplus Uses: Opinions differ radically, even within parties. Proposals include:

LA-MN believes well-being for the whole state, while addressing our greatest human needs, are most important. Tax 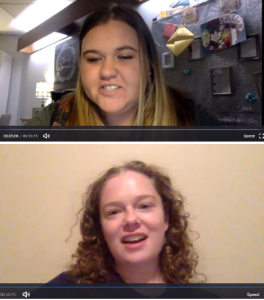 LA-MN Staff: Director Tammy Walhof and Hunger Advocacy Fellow Rachel Wyffels have been busy with coalition partners, hearings, conversations with advocates and more. Wyffels has been engaged with the Northeast Minnesota Synod EcoFaith Team in producing creation care trainings. She is cohosting the weekly Zoom trainings with Kali Kadelbach, a Youth Pastor in Princeton. 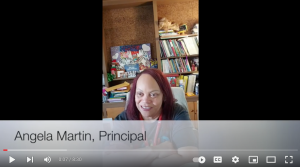 Last month HNO hosted a conversation on education and hunger in our communities. Our local school cafeterias are the frontlines against childhood hunger, and our schools are vital in preparing students for the challenges of a constantly changing economy of the future. You can watch that webinar here. You can also watch the short video we put together of educators talking about our schools and the needs that they see.

We are excited to host this month’s webinar on “Caring for Creation to End Hunger”. You can join us on Wednesday March 23rd at 1pm EDT by clicking here to register!

Redistricting takes center stage in Ohio. The majority party continues to pass maps without minority party support that continue to be rejected by the Supreme Court of Ohio for unfairly gerrymandering districts to guarantee safe majorities and super-majorities for the next four to 10 years. Districts need to be fairly drawn to reflect the needs of our communities and not extremist out-of-state interests that can repeatedly dominate district priorities.

Budget advocacy took shape in February as the legislature was occupied with related hearings. LAMPa began planning legislative meetings and hunger network action on the State Food Purchase Program, the Pennsylvania Agricultural Surplus System and a proposed increase in the minimum Supplemental Nutrition Assistance Program (SNAP) on our anti-hunger agenda.

In good news on food security and equity, LAMPa Director Tracey DePasquale participated in a meeting of the state 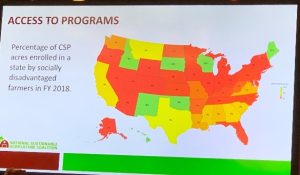 Emergency Food Assistance Advisory Committee, where it was announced that an increase in the income eligibility threshold for The Emergency Food Assistance Program should be in place by early summer, allowing people with incomes of up to 185 percent of poverty to qualify. In addition, the Department of Agriculture announced plans to focus on socially disadvantaged farmers in a new federally funded local food purchasing program that will distribute food through the charitable network. 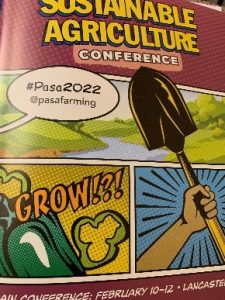 Food security, sustainability and equity were also themes of the Pasa Sustainable Agriculture Conference, which DePasquale attended, connecting with farmers and coalition partners in preparation for work on the federal Farm Bill.

As part of LAMPa’s focus on sustainability, staff worked with colleagues in ELCA federal and U.N. offices to advance work with Pennsylvania congregations and institutions striving to meet climate goals and to support the church’s witness at the sixty-sixth session of the U.N. Commission on the Status of Women, focused on climate change.

LAMPa staff and policy council members worked to prepare for an April hybrid learning and advocacy event focusing on housing and homelessness.

In response to the Texas Legislature’s voter suppression efforts in 2021, Texas Impact is working with partner congregations to equip Texans of faith to support democracy by participating in local elections – from registering voters to recruiting election workers. In addition, Texas Impact joined the Brennan Center’s lawsuit against the Texas voting bill.

ELCA Hunger Advocacy Fellow Isa Peterson is leading an effort to complete a report on Texas’ Public Utility Commission sunset process, which will be released in March.

Texas Impact’s weekly podcast “Weekly Witness” relaunched in January with a new producer and new format. This will allow even higher quality content to equip Texans of faith to participate in justice and advocacy work.

The Texas Impact Board of Directors is beginning a project to compile social statements from member judicatories.

We launched our work in 2022 with the 60-day Wash. State Legislative Session that began on January 10 and ended March 10. Our new Policy Engagement Director Kristin Ang is off to a great start – she quickly learned from Paul Benz and our many coalition partners and helped prioritize an ambitious Legislative Agenda.

To get our network ready for the 2022 session, FAN hosted two “Preparing for the 2022 State Legislative Session Trainings”. Advocates joined us to get an overview of our legislative agenda, hear from legislators on how and why to advocate, learn about the important websites to visit while advocating in a virtual setting, and meet in breakout rooms by issue topic to delve deeper into the bills on our agenda. 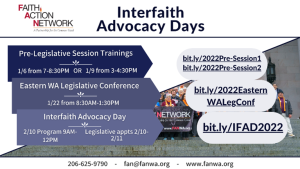 We co-sponsored the Eastern Washington Legislative Conference on January 22, with the theme “Mobilizing for Our Future,” featuring Fr. Pat Conroy, SJ, former chaplain to Congress. Hosted online, advocates heard from an interfaith panel on mobilizing faith communities for justice, workshops on critical issues facing their communities, and a legislative briefing. Our signature event, Interfaith Advocacy Day (IFAD) 2022, was held on Zoom February 10. From Bellingham, Spokane, Tri-Cities, Ellensburg, Vancouver, the Olympic Peninsula, and across the Puget Sound region, 150 advocates representing 39 legislative districts attended more than 80 meetings with legislators and their aides. Workshops were offered by FAN volunteers and our coalition partners, and legislators and faith leaders encouraged attendees’ advocacy. Next month, we will share the recap of some great bill victories, and what will need more work in the year ahead. 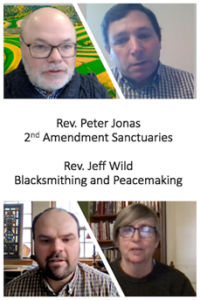 Wednesday Noon Live: The Rev. Peter Jonas shared his experience working with other clergy and lay leaders advocating against Trempealeau County becoming a 2nd Amendment Sanctuary. The Rev. Jeff Wild discussed his work blacksmithing and peacemaking. Gun control is not one of LOPPW’s priorities, but we can still offer guidance on how to advocate.

New on LOPPW’s Website: Under Resources, Reflections & Tools we added a “Youth Advocacy” section and “Hunger Leaders WI/UP” section. The latter is to assist a group of ELCA Hunger Leaders from Wisconsin and the Upper Peninsula of Michigan in their efforts to network within our six synods. They have included advocacy in their three recent sessions.

Connecting: LOPPW had an in-person presence at synod events in the Greater Milwaukee Synod and South-Central Synod of Wisconsin. LOPPW Director Cindy Crane has been meeting with all six bishops individually to update them and receive input. Crane also attended an interfaith anti-sex trafficking event at a Catholic church and has met with leadership teams for anti-sex trafficking, climate justice and juvenile justice.