ELCA Blogs / ELCA Advocacy / What’s at Stake: The Importance of U.S. Support for the United Nations

What’s at Stake: The Importance of U.S. Support for the United Nations

By Lia Hansen, Program Associate at the Lutheran Office for World Community 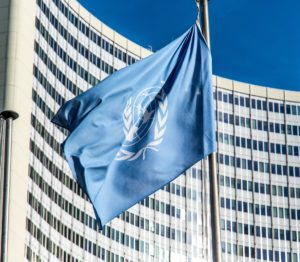 commitments since 1945. As an example, a 2005 UN Reform Act[1] passed in Congress called for a switch from UN Charter-based assessed dues plus voluntary contributions to a fully voluntary funding model, withholding dues until certain reforms were met. Although this act was never implemented, a strong desire exists in many sectors of U.S. society for decreased involvement in the United Nations continues to exist.

President Trump’s administration has capitalized upon and furthered an anti-UN stance. The new administration submitted two draft executive orders to the National Security Council that were withheld from approval pending further review by the State Department. The draft orders called for at least 40% overall decrease[2] in U.S. voluntary contributions. This would be difficult to implement immediately, but new administration’s goal to seriously diminish U.S. involvement in UN programs is clear.

As people of faith who do advocacy on behalf of and within the Lutheran church, we believe that justice is what God’s love and our love for our neighbors looks like in public. As such, it is alarming to think that many of the UN programs aimed at helping the world’s most vulnerable could be diminished or eliminated.

While the U.S. pays the maximum rate in dues to the UN by Member States (22% for regular operations and 28% for peacekeeping), this only encompasses about 0.1% of the total federal budget. Moreover, the U.S. derives economic benefits from continual engagement with the U.N.; for every $1 invested in the UN secretariat, the U.S. receives over $1.60 in return in economic activity in New York[3].

The Better World Campaign estimates that United States’ contributions to the U.N. directly provide vaccinations for 40% of children worldwide, assists 65 million refugees, funds 120,000 peacekeepers, fights poverty for 420 million rural poor, and has saved the lives of 30 million women through the promotion of maternal health.  Among all these initiatives, I will outline the contributions made and programs delivered by three critical agencies: United Nations Relief and Works Agency for Palestine Refugees in the Near East (UNRWA), the World Food Program (WFP) and the Office of the United Nations High Commissioner for Refugees (UNHCR).

The United Nations Relief and Works Agency for Palestine Refugees in the Near East was established in 1949, following the Arab-Israeli conflict, to provide relief and works programs to Palestinian refugees. UNRWA’s services range from education, health care, relief and social services, and emergency assistance; it has assisted generations of Palestinian people since its foundation. Lutheran World Federation has worked in partnership with UNRWA since 1949 to provide healthcare for many Palestinians in Jerusalem[4]. In the year of its founding, UNRWA responded to the needs of 750,000 refugees. Its operations have grown exponentially, now serving 5 million eligible refugees.

The United States plays a pivotal role in the provision of these services. In 2015, the U.S. donated $380,593,116, around 30% of the total budget[5]. As the biggest voluntary contributor, a potential reduction of 40% would be disastrous.

Not only would a U.S. funding cut impact the lives of millions of Palestinian refugees, but would also result in threats to livelihoods and create social disruption and insecurity in the societies of the Occupied Palestinian Territory, Lebanon, Jordan, and Syria which host them, fueling major political and economic instability in the region.

The World Food Program was founded in 1961 as part of the UN system. It currently assists 80 million people in more than 80 countries each year. It is the leading international organization fighting hunger. In a world where one in nine people worldwide don’t have enough to eat, the WFP food assistance services are essential. The WFP will be instrumental in reaching the Sustainable Development Goal #2 of zero hunger.

The WFP is funded entirely by voluntary donations. Out of its $5.9 billion budget in 2016, the U.S. funded around a third ($2 billion) of its total budget. In addition, the U.S. has funded special programs in emergencies, such as providing an additional $125 million in 2014 for the Syrian crisis[6].

The WFP recently declared famine in several regions of South Sudan, with 100,000 lives threatened in addition to the 5 million South Sudanese facing severe food insecurity. Food insecurity has increased in the region due to many factors that contribute to inadequate access and delivery. Climate change phenomena affecting the Horn of Africa has led to major droughts in Somalia. This combined with other factors has led to a major food crisis in East Africa, potentially affecting around 3 million people, with increased risk for famine. The WFP is instrumental in mitigating these and countless others protracted food insecure situations worldwide. Action must be taken, and a major U.S. withdrawal is likely to result in countless lives lost.

Office of the United Nations High Commissioner for Refugees (UNHCR)

Since its formation in 1950 the UNHCR has served and protected approximately 50 million refugees. The Office of the United Nations High Commissioner for Refugees is the leading international organization aiding and protecting refugees worldwide, providing food, shelter, and medical services in over 126 countries[7]. The Lutheran World Federation is a historic and active partner, the fifth largest, aiding 1.4 million refugees in 2012. In addition to operations in Jordan, Mauritania, Chad, Djibouti, Ethiopia, Kenya, and Nepal, the LWF closely collaborates with UNHCR in South Sudan[8]. Around 1.5 million people have fled to camps in Ethiopia, Kenya, Sudan and Uganda, in addition to the 1.5 million internally displaced people within South Sudan[9]. The UNHCR’s work is critical in aiding and protecting these refugees.

The United States plays a critical role in this work, providing 21% (1.5 billion) of the UNHCR’s $7 billion budget. The shift in the U.S. President’s administration towards one that disparages the lives of refugees, in addition to the proposed UN budget cuts, seriously threatens the lives of the millions dependent on UNHCR’s protection and services.

This is not only a fiscal issue; it is a moral issue. Through the strong in our commitment to the values and programs represented by and carried out through the United Nations, and advocate for renewed U.S. financial commitment as vital to ensuring human rights and dignity for all.

Conclusion
At 22% of the general UN budget, and 28% of peacekeeping operation costs, the U.S. provides invaluable support to U.N. programs worldwide. Decreasing funding by the proposed 40% will inevitably forfeit United States’ leadership at the UN, and threaten critical programs worldwide. The ELCA recently signed on to a letter addressed to congressional leadership strongly urging congress to renew its commitment to and leadership in the United Nations.

This is not only a fiscal issue; it is a moral issue. Through the strong in our commitment to the values and programs represented by and carried out through the United Nations, and advocate for renewed U.S. financial commitment as vital to ensuring human rights and dignity for all.