LAMA Summit. The third annual LAMA Summit featuring Rev. Eugene Cho of Bread for the World was engaging, thought provoking, informative and fun for the nearly 40 clergy, LAMA liaisons and hunger leaders in attendance. The event consisted of opening devotions on 1 Kings 17; an introduction to LAMA and its policy priorities; the keynote address by Rev. Eugene Cho; small group conversations to process Rev. Cho’s address; a lengthy Q & A with Rev. Cho; an update on the new legislative districts; an update on current hunger legislation; a practical demonstration of advocacy; and advocacy practice speaking to legislators.

2023 Policy Priorities. The LAMA Policy Council met in November to review the year, discuss the social and political issues facing Arizona, and agree on what LAMA’s priorities would be for 2023. The council agreed LAMA’s primary focus will be to continue advocacy and education around Hunger in our most vulnerable communities, including partnering with hunger anti-hunger advocates around the state and launching the Arizona Anti-Hunger Alliance. In addition, LAMA will continue its work in Civic Engagement as it relates to our Lutheran heritage of being a publicly engaged church, encouraging participation in all areas of our government. Finally, LAMA will focus on Water, educating ourselves and our network on the complex issues related to water in Arizona.

Meetings were held between the LOPP-CA office and California congregations during October to discuss the policy office’s positions on the upcoming ballot propositions. It was great to see a large turnout at those events!

Election day has passed, but votes are still being counted in California and across the country –  and we expect mail-in ballots to continue coming in for a while yet. Currently, ballot propositions 1, 28, and 31 are passing with ‘yes’ votes. These propositions would enshrine the right to reproductive freedom in the California constitution, provide more funding for arts and music education, and uphold a law banning the sale of flavored tobacco products, respectively. The LOPP-CA policy council supported proposition 1 and 31 and took no position on 28, the arts and music education funding. Measures the policy council were against, including two on sports betting regulations, are currently receiving more ‘no’ votes and willould not pass if the results continue in this direction.

The 27th UN Climate Change Conference of the Parties (COP27) is also taking place from November 6th-18th in Egypt, and Regina Banks is attending on behalf of the ELCA and LOPP-CA. You can find updates from her on our social pages throughout the conference.

COLORADO ELECTION RESULTS: Coloradans voted on 11 statewide ballot measures this election season. We are excited to report that all three measures which we supported have passed! 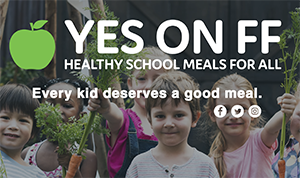 NEW MEMBERS: Minnesota House and Senate both lost many veteran lawmakers through retirement, redistricting, and elections. About 35% of both chambers are new.

NEW LEADERS: Representative Melissa Hortman will remain Speaker of the House, but Representative Lisa Demuth will replace Representative Kurt Daudt as Minority Leader (first time since 2014 someone other than Daudt leads House Republicans). Demuth is anticipated to have a less confrontational leadership style. Representative Jamie Long will be the new House Majority Leader, so we are watching to see who will take over Energy & Climate leadership from Long.

Both parties will have new leadership in the Senate. Senator Kari Dziedzic will be new Majority Leader, Senator Bobby Joe Champion will be the first person of color to serve as Senate President, and Mark Johnson of East Grand Forks will be Minority Leader (replacing Senator Miller, who chose not to run again after just 1 year as the head of Senate Republicans). Much remains unknown about committee chairs, particularly Agriculture, since most senators from rural Minnesota are Republican.

A decade of advocacy…

According to the 2022 Annie E. Casey Foundation’s KIDS COUNT Data Book that measures 16 indicators of child well-being in the areas of economic well-being, education, health, and family and community, New Mexico once again ranked 50th in the nation. Though the data used does not consider several key state-level policy changes made recently, the challenge for improvement is immense.

On Election Day, 70% of New Mexico voters approved an amendment to the state’s constitution that advocates, including LAM-NM, believe will truly transform the health and well-being of the state’s youngest and set a standard for the rest of the nation to follow. Driving the decade long battle was the belief that every family and individual should have access to an affordable, evidence-based, and high-quality prenatal and cradle-to-career system of care and education.

Constitutional Amendment #1 will authorize an additional 1.25% to be withdrawn annually from the state’s unique Land Grant Permanent Fund, financed by state oil and gas revenue and interest on the fund’s investments, which is currently valued at $26 billion. If passed by the U.S. Congress, it is estimated that an initial $150 million would be available to early childhood education, and another $100 million for K-12. Among the many proposals being considered, this includes expanding early childhood services like state-wide prenatal care, home visiting, high-quality childcare and pre-kindergarten programs. Other priorities include moving childcare worker average pay to $18 an hour and making permanent the policy change last year that made childcare free for most NM families.

Over several contentious sessions, LAM-NM worked alongside numerous partner organizations, which together, formed the Invest in Kids, NOW coalition. While joyous about our victory, the coalition will now join with the state on the hard work it will take to create transformational programs for the future.

The Hunger Network and the Ohio Council of Churches are joining together to host Advocacy in Advent: A Lame Duck Lobby Day! We will discuss the important efforts we can take as a state to end hunger in Ohio and transform our criminal justice system to support neighborhoods, families, and communities to regain stability. You can join us by registering here: https://actionnetwork.org/ticketed_events/advocacy-in-advent .

HUNGER ADVOCACY FELLOW: We are grateful to ELCA World Hunger for supporting a new Hunger Advocacy Fellow position in Ohio who will begin on November 28th.

ISSUE 1 and ISSUE 2: Sadly, both Issue 1 and Issue 2 passed on election day in Ohio. Issue 1 cements cash bail into Ohio’s constitution. Issue 2 bans non-citizens and, due to a drafting error by the State Legislature, may also end up preventing 17 year olds who will be 18 by the election from registering to vote. “As a person with an early November birthday, this could have disenfranchised me from voting in my first election,” said Deacon Nick Bates, Director of the Hunger Network in Ohio. 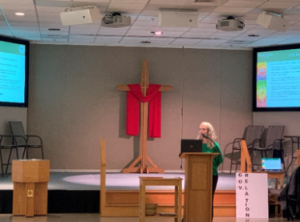 The Pennsylvania Hunger Action Coalition held its annual meeting at Trinity Lutheran Church in Camp Hill to begin establishing priorities for the next session of the General Assembly and new Administration.

In the waning days of the 2022 session of the Pennsylvania General Assembly, Lutheran Advocacy Ministry – Pennsylvania (LAMPa)  and fellow housing advocates applauded the passage of legislation lifting the cap on the state’s housing trust fund by $20 million.

The increase, which brought the cap on revenues for the Pennsylvania Housing Affordability and Rehabilitation Enhancement (PHARE) Fund to $60 million annually, came on the heels of more than $375 million in American Rescue Plan funding targeted to housing and homelessness in the FY 2022-23 budget.

Although LAMPa advocates and coalition partners in the Housing Alliance of Pennsylvania had pushed for bipartisan legislation that would have raised the PHARE Funding cap to $100 million over three years, the progress is welcome. Read more.

In addition to surveying our network and Pennsylvania ministries about needs, LAMPa began meetings with coalition partners to begin informing our priorities for the next legislative term. LAMPa’s policy council will consider that policy agenda in December.  Trinity Lutheran Church in Camp Hill graciously hosted leadership from the Pennsylvania Hunger Action Coalition as that group shared updates and discussed potential areas for collaboration in fighting hunger in the Commonwealth.

LAMPa participated in planning for a Southwestern Pennsylvania Synod event to honor the work of the Rev. Dr. Martin Luther King Jr., continued organizing for the Homeless Memorial Blanket Project in Washington, D.C., and attended a regional faith-based environmental summit co-hosted by the Lower Susquehanna Synod.

In preparation for the general election, Texas Impact participated in presentations in congregations throughout the state, including our Faith in Democracy Series with events in Austin, Houston, Dallas, and Denton. Faith in Democracy events included a faith leader panel discussing why our faith calls for participation in democracy and advocacy efforts, training on Texas Impact’s Election Center tools, and breakout sessions on key public policy issues. Texas Impact also targeted social media ads to encourage voting and supporting the election infrastructure as election workers or poll monitors.

The popular Courts and Ports Program is re-launching with a new Immigration Education and Advocacy Manager, Fabiola (Fabi) Olvera Benitez coordinating trips to the Texas-Mexico border.

Election results changed little in terms of state leadership, so Texans of faith are preparing for the Texas Legislature to convene in January 2023 in a session that could be very similar to 2021.

During Food Week of Action in October, the Faith Action Network (FAN)  hosted a Food Policy in WA webinar (linked on our YouTube page) with our coalition partners at Northwest Harvest. We also co-hosted two forums with indigenous writers Sarah Augustine and 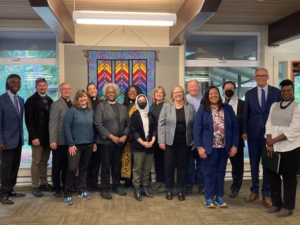 Mark Charles regarding the ways the Doctrine of Discovery continues to impact native peoples and lands.

FAN helped organize faith leaders in a press conference in October with Governor Inslee and state legislators announcing protective legislation for reproductive choice and gender affirming care in our state. Here’s the recap of the legislation proposed.

We are in full preparation mode for our hybrid Annual Dinner, Sunday evening, November 20, in Renton, Spokane, and online. Our biggest fundraiser of the year is also a time to come back together in-person after two years and renew our connections and solidarity for justice across the state.

WEDNESDAY NOON LIVE: We interviewed outgoing Republican Senator Kathy Bernier about her views on elections in Wisconsin. Our conversation included the costly Gableman investigation and the Wisconsin Elections Commission.

ELECTIONS: Governor Evers was re-elected. Michaels, his opponent, claimed he wanted to decertify the 2020 election. How elections are certified made our Secretary of State race unusually contested. At the time of writing this report, the election hasn’t been called. Earlier,  Lutheran Office for Public Policy – Wisconsin (LOPPW) interviewed Sec. of State La Follette (D) after extremists tried to prevent him from certifying the 2020 election. U.S. Senator Johnson was re-elected for a third term. The 3rd Congressional race was closer than expected. In the end, Derrick Van Orden, known for being present at the Trump rally just before the insurrection, won. After Wisconsin maps recently became more gerrymandered, the party that has the legislative majority won enough seats for a supermajority in the Senate but not the Assembly, which means the governor still has veto power.

JUVENILE JUSTICE SYSTEM: A few of us from our coalition’s steering committee recently met with staff from the Bucks Basketball Team to discuss their interest in supporting our efforts in returning 17 year-olds to the juvenile justice system

CARE FOR GOD’S CREATION: LOPPW had its second meeting with staff from Faith in Place and confirmed plans to organize a spring advocacy day.

YOUTH: Representatives from six synods are working with LOPPW to organize our first high school youth gathering with a focus on advocacy, scheduled for April 14 – 16, 2023.