Lutherans in the 118th Congress

The 118th U.S. Congress convened on January 3, 2023. Following finalization of House speakership, the official swearing in took place January 7, 2023. The following are some of the legislators with Lutheran affiliation who will serve the country in this new session. 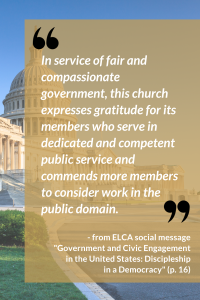 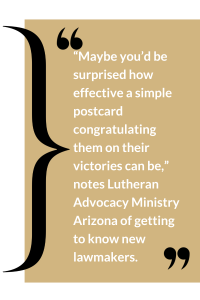 “Taking the time to learn about your legislators is an invaluable asset to your advocacy efforts at any level of government,” notes Lutheran Advocacy Ministry Arizona in the ELCA-affiliated state public policy office network. “Maybe you’d be surprised how effective a simple postcard congratulating them on their victories can be,” they add.

Get a jump start on building relationships with your lawmakers this session! Start by making sure you know who represents you. Use govtrack.us to find federal officials, or openstates.org, among other lookup tools to find websites and social media for state and federal leaders, as well as www.congress.gov/members/find-your-member.