By Jillian Russell, Hunger Network Ohio [about the author] 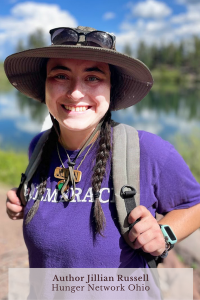 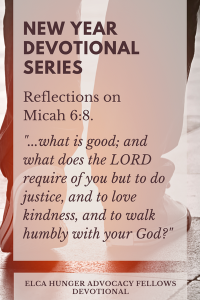 How was I supposed to do justice, to love kindness, and to walk humbly with my God if I didn’t even believe I could do so? As much as I have tried to change this aspect of myself in recent years, I constantly find myself being burdened by self-doubting thoughts.

I especially found this after I graduated with my undergraduate degree from Capital University in the spring of 2022. I had decided to take a gap year between undergrad and grad school but was still confused about what to do in that time. In my previous summers after college terms, I had worked at Lutheran summer camps, and I decided to do this again for one last summer, this time in Colorado at Rainbow Trail Lutheran Camp. I had decided to leave my beloved camp in North Carolina and stretch myself to have a new experience. And, to make things even more difficult, I decided to not be a counselor this time but take on a travel director role for the summer. A whole new camp, in a whole new state, and in a whole new position. I was terrified to say the least.

As a self-doubter, I started in on myself. Was I good enough to lead counselors? Was I even fit for this camp? Would I let people down? Could I really be a leader to these God-ly people? These thoughts and many others were constantly running through my head. I had begun to believe that this was not what God had planned for me. I was not meant to change lives and lead God’s people. This was not where I was meant to be.

I went through many weeks severely doubting my abilities, until this one moment.

As a travel director, I was rarely on-site but was rather traveling doing day-camp ministry. But, this particular week, I was on-site helping to lead a family camp. On this particular day, my previous hike had been canceled, and I was really bummed because my new role was giving me fewer opportunities to hike. Then, out of nowhere, a family asked me to take them on a hike to a different location. 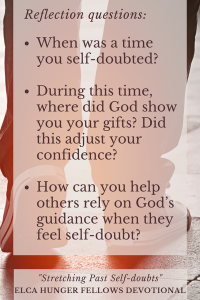 As we were hiking, I still had these self-doubting thoughts running through my head, and what made it even worse was that I actually got lost and went on a different route. I was totally bummed and disappointed in myself. I had not only failed myself, my self-doubts said, but this family I was leading. Then, the father of the family looked at me when we reached our new location and said, “I know you think you failed us, but look. If we hadn’t had made that wrong turn, my girls would have never cried looking at the beauty of God’s creation. We would never have made the memory of laughing at our wrong turns, but most importantly, I would have never admired God’s work like I am now. You showed us that.”

I was stunned. But in that moment, I knew I was where I was meant to be. Even with all my mistakes and self-doubts, I was truly where God had put me. The self-doubting thoughts diminished with other guidance. God placed me in that moment to not only lead God’s people, but to do it by leading in justice, loving in kindness, and walking humbly with God.

ABOUT THE AUTHOR: Jillian Russell is currently serving with Hunger Network Ohio. Russell graduated from Capital University in Columbus, Ohio where she studied Youth Ministry and Christian Education and Psychology. As an ELCA Hunger Advocacy Fellow, she hopes to continue her work in building connections between people of different faiths and traditions, and expanding advocacy on state and local issues.