Lutherans in the 116th Congress

The start of the 116th Congress begins this week. As five new Lutheran lawmakers are sworn in to the U.S. House of Representatives, check out some of the Lutheran legislators who will serve our country in this new Congress.

Both incumbent ELCA Lutherans who ran for re-election to the U.S. Senate, Sen. Martin Heinrich, D-N.M., and Sen. Sherrod Brown, D-Ohio, successfully won their respective races in November. They will rejoin their other Lutheran Senate colleagues when the new Congress starts in January 2019, including ELCA members Sen. Jeff Merkley, D-Ore., and Sen. Joni Ernst, R-Iowa; as well as Wisconsin Evangelical Luthe 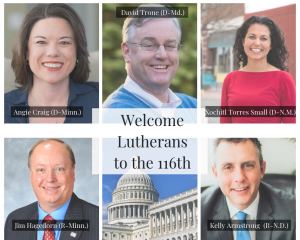 Get a jump start on building relationships with your lawmakers with ideas from an interfaith guide, “Make Sure Your Member of Congress Knows You!”