We are encouraged to learn about residential and boarding schools, honor survivors, and remember those who never made it home from the schools in “Telling and Teaching the Truth: The Church’s Obligation to Education about the Ongoing Legacy of the Doctrine of Discovery” presented by the ELCA with the Evangelical Lutheran Church in Canada, Anglican Church of Canada, and The Episcopal Church (September 2021). The open letter expressing commitment notes: “Our churches’ work to repudiate the Doctrine of Discovery begins with the costly work of telling the truth.” We are thankful for truth-telling from our guest blogger in this Native American Heritage Month.

By guest blogger the Rev. Manuel Retamoza [about the author] 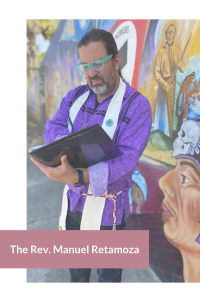 As both a member of the Cherokee nation and a first-generation Mexican American, news stories from the southern border in 2018 were more than just headlines for me.

Headlines were made when the news broke about the practice during the previous executive administration of separating immigrant children from their parents at the southern border. We all saw images and heard stories of children, even babies, being held in squalid conditions while being processed by U.S. Customs and Border Protection. There was a public outcry against the dehumanizing practice of forcefully removing children from their parents, which led to protests on both sides of the border.

These stories tap into the deep, largely unacknowledged, pain that Indigenous peoples in the United States have carried for generations around the governmental and the church practice of forcefully removing Native American children to send them to residential boarding schools. The philosophy of one of these institutions, The Carlisle School in Pennsylvania, was “Kill the Indian, save the man.”

I was overwhelmed with empathy for these Central American (often also Indigenous) children, many of whom I met when I volunteered at a shelter here in San Diego, knowing that this is a repeat of our country’s history. Whether it was the separation of families at our border or with our Indigenous children who were taken from their communities to boarding schools, separating children from their families has been used to implement harm and family devastation for 500 years by those who colonized this land we call Turtle Island.

Recently I preached at the Vine Deloria Jr. Theological Symposium at Lutheran School of Theology at Chicago. We gathered around the theme “On Our Way to Truth and Healing.” In my sermon, I reflected on Jesus’ words in Mark 13: “Pray that it may not be in winter. For in those days there will be suffering, such as has not been from the beginning of the creation that God created until now, no, and never will be.” These words also describe my people, the Cherokee – gathered up like livestock – forced out of their homes with nothing but the clothes on their back, held in stockyard-like conditions as the U.S. military prepared to “escort” them 2,000+ miles to what is now Oklahoma. It was in winter when this happened, and many of our elders and children did not survive. 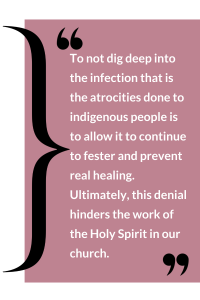 A generation later, children would be taken from their families, only this time to Indian boarding schools. Many of these children never returned. Those who survived endured neglect and abuse by the adults entrusted to care for them. It is here where some of the worst atrocities against Native people took place because we were robbed not only of our children but our future. The goal was to kill and bury our story, our truth. The goal was erasure and elimination, but we are still here.

We can’t sit back and ignore the truth when it is presented to us. Truth once revealed must be struggled with, even the painful truths of what we have done and left undone as a church and as individuals. To not dig deep into the infection that is the atrocities done to Indigenous people is to allow it to continue to fester and prevent real healing. Ultimately, this denial hinders the work of the Holy Spirit in our church.

By telling the real story and allowing our people to tell their real story we invest in our future by not forgetting our past injustices and work toward healing for our future. It is in sharing the story, both the good and the bad, that we truly discover our need for God’s grace.

In October 2021, the ELCA released “A Declaration of the [ELCA] to American Indian and Alaska Native People.” The declaration is a direct result of the social policy resolution, “Repudiation of the Doctrine of Discovery, which was passed by the 2016 ELCA Churchwide Assembly. In the declaration, the ELCA acknowledges the theological and Christian foundation of the Doctrine of Discovery, which has codified colonialism and religious intolerance as societal norms for more than 500 years. Direct links and more are available in an ELCA news release.

ABOUT THE AUTHOR: The Rev. Manuel Retamoza is senior pastor at St. Andrews Lutheran Church in San Diego, California. He also serves as vice president of the ELCA American Indian and Alaska Native Lutheran Association.