The 24th International AIDS Conference took place from 29 July to 2 August 2022. The theme of AIDS 2022 was Re-engage and follow the science. It was the first time the conference was hosted in person in Montreal, Canada, as well as virtually. The conference featured the latest HIV science, explored indigenous responses to HIV, surveillance ethics, health innovation, quality healthcare, HIV cure and vaccine research and much more. The new UNAIDS report, In Danger, released at the conference, highlights the devastating consequences if urgent action is not taken to tackle the inequalities which drive the pandemic. It further shows how the AIDS response has been “blown off course”, making action urgent.

Pre-conferences began on 27 July. The Interfaith Pre-Conference was held 27-28 July under the theme “Taking Action to Overcome HIV Stigma & Discrimination Comprehensive, Compassionate Care for All.” The pre-conference was organized by the Interfaith Health Platform (IHP), in collaboration with UNAIDS and PEPFAR. IHP advocacy initiatives include the 12 MILLION CAMPAIGN that engages faith leaders, individuals and communities to promote access to health services to the now 10 million children, women and men living with HIV who are not yet on antiretroviral treatment.

There was some uplifting news. According to UNAIDS, the new research presented at the conference showed that “injectable PrEP [pre-exposure prophylaxis] is among the most effective tools for preventing HIV available and that it works well in multiple populations.”. The World Health Organization (WHO) released new guidelines and drugmaker ViiV announced licenses for generic manufacturing of the drug, cabotegravir long-acting (LA), for HIV PrEPin 90 countries.

Other commitments were made by African leaders and by international partners who joined in a new Global Alliance to End AIDS in Children.

The Interfaith pre-conference delegates, the International AIDS Society, UNAIDS and civil society organizations all expressed concern and were saddened by the high number of denied and pending visas for the purpose of attending the events by Canadian authorities. These included researchers, officials, and people living with HIV from Africa, Asia, and Latin America. There was global outcry to ensure that the next host of the conference must guarantee that the most affected by HIV can be present at this important world’s largest conference on HIV and AIDS.

Healthy School Meals for All campaign kicks off: The Healthy School Meals for All ballot measure will appear before Colorado voters on their November ballot. As a member of a diverse statewide coalition, we’re excited to announce the official kick-off series for our “Yes” campaign! The Denver kick-off will took place at Edgewater Elementary on August 11. Colorado Springs’ kick-off was at Food to Power on August 15, followed by the Western Slope.

The ballot measure will soon have a name, but we already have a website: https://www.healthyschoolmealsforallco.org. Also check us out on social media at Facebook.com/SchoolsMealsforCO and on Twitter @SchoolMeals4CO.

Register now for Thirsting for Water: Lutheran Advocacy is collaborating with the Rocky Mountain Synod (RMS) World Hunger Team and the RMS Creation Care Team to host “Thirsting for Water: At the Intersection of Climate, Water and Hunger” on Saturday, September 17. Join us at Bethany Lutheran Church, Denver, or on Zoom for a day for holy conversation & community-building with faithful people from the Rocky Mountain Synod and beyond. We’ll learn the facts about the drought affecting our region, engage in theological reflection and story-telling, hear stories of the impact on agriculture, consider policy and advocacy, and contemplate how we can respond to the crisis together.

More information & registration can be found at https://www.rmselca.org/events/thirstingforwater.

Director for the Lutheran Office for Public Policy – Delaware, Gordon Simmons was able to be in all 12 ELCA churches this year, to preach and to lead a forum on issues.

Among issues was support of a bill that would have required training before purchasing a firearm, which did not pass. However, in the aftermath of the shootings earlier this year in Buffalo, New York, and Uvalde, Texas, two bills were quickly passed and signed by the governor: one which outlaws assault weapons (HB 450) and another which raises the age to purchase a firearm to 21 (HB 451).

LOPP-Delaware worked a lot with a clean energy coalition. A bill was introduced in the last month of the session which would have raised the state’s goals for reduction of greenhouse gases, which are currently at 40% reduction by 2035, and would have given the state much more extensive regulatory power. At the last minute the Governor pulled his support, and while the bill passed the Senate, it failed to get out of the House committee with a 5-6 vote. We’ll be back next year.

Delaware codified at the state level the healthcare protections which were found in Roe v Wade several years ago. After the Supreme Court decision in the Dobbs v Jackson case, the Legislature passed bills HB 455 and HB 460. These bills give certain physician assistants and registered nurse’s the authority to perform abortions and to prescribe medication to include abortions, and also protects those seeking abortions who travel from out of state from lawsuits. 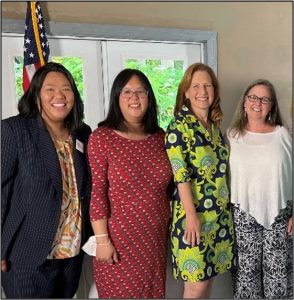 Our work this summer has included bills in Congress that will impact communities across our state. In July, we were present at a Congressional hearing on the Farm Bill, held locally in Carnation, Wash. It was such a great day for food security in Washington, as Congresswoman Kim Schrier and House Agriculture Committee members listened to advocates, farmers, and food bank providers about shared priorities for Farm Bill reauthorization to end hunger. FAN Policy Engagement Director Kristin Ang spoke to the power of SNAP benefits for our neighbors who are struggling, and while faith communities are on the front lines in response to hunger, they can’t do it without equitable public policy. We will continue to work with our colleagues at the Washington State Anti-Hunger & Nutrition Coalition (pictured at right with Rep. Schrier, 2nd from right) and our ELCA partners.

In advance of Washington state primary elections, FAN co-sponsored some candidate forums with our colleagues at the Coalition of Immigrants, Refugees, and Communities of Color (CIRCC) and the Seattle-King County NAACP. Following our four summits across the state this spring, our legislative agenda for 2023 will continue to take shape in collaboration with the newly-formed FAN Policy Committee, our governing board, and our 25+ coalition partners. 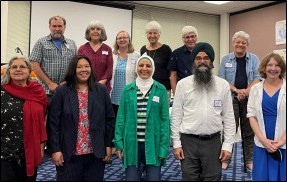 The FAN governing board and staff enjoyed a rare opportunity to meet in person and online in July in a statewide planning retreat, hosted by the Sikh community’s Khalsa Gurmat School in Federal Way. We listened to each other’s perspectives, identified some of the most critical challenges to our communities during this difficult time, and considered some multi-faith approaches to help us adapt to meet these challenges. It was a chance for new board members and new staff members (including our new part-time organizers in central Washington) to become acquainted; after two years of online meetings, we felt the tangible impact of planning together in person. We are energized to work together to best address the needs ahead.