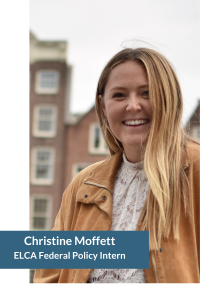 After many months of deliberation, Congress has passed and President Biden has signed the Inflation Reduction Act of 2022, a federal spending bill that was heralded as a crucial step towards finding solutions to the climate crisis by making the largest federal investment ever in clean energy technologies. This investment comes as movement toward the United States fulfilling its pledge, under the Paris Climate Agreement, of 50% reduction in emissions by 2030. By fulfilling this pledge, the United States will prioritize our environment in need of care and aim for a better quality of life today without shortchanging future generations.

Our faith community acted on our convictions, adopting during the very recent 2022 ELCA Churchwide Assembly a memorial on Greenhouse Gas Reduction. This memorial reaffirms our commitment to engage in creation care and act in support of 50% reduction in 2005 U.S levels of greenhouse gas pollution by 2030 and achieving net-zero emissions by 2050, including having the churchwide organization meet these goals. With all of this in our minds and in our hearts, it is not without discernment that we can celebrate the recent passage of the largest federal clean energy investment in U.S. history.

Elements of the Act 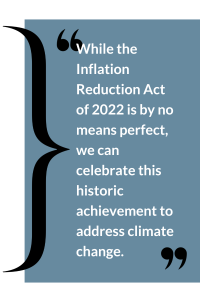 The Inflation Reduction Act of 2022 most notably invests $369 billion in energy security and climate change programs over the next ten years. This is the largest investment by the United States in climate and clean energy to date. This bill contains crucial investments in solar, wind, electric vehicles and environmental justice, along with new penalties on methane pollution that will make a significant dent in our carbon pollution.

The climate investments from the Inflation Reduction Act will put our nation on the path to cut climate pollution emissions 37-41% by 2030 as compared to 2005 levels, according to Energy Innovation: Policy and Technology, a non-partisan energy and climate policy think tank. Additionally, this bill is projected to create 1.5 million new jobs. The Inflation Reduction Act of 2022 also pledges to invest $40 billion in agriculture, forestry and rural communities. This investment would put a priority on climate-smart agriculture, rural power and clean energy, and wildfire protections and climate-smart forestry.

In addition to climate provisions, the Inflation Reduction Act of 2022 will make health care more accessible for more people by continuing the Affordable Care Act subsidies and allowing the government to negotiate prices for prescription drugs in the Medicare program. It also makes changes to current tax credits that impact some homeowners and car buyers as well as shifts some longtime tax policy, particularly for some large corporations, provisions which also aim to address inflation.

Compelled to Act on Climate Change by Faith Foundation 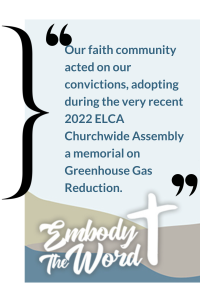 As Lutherans, we understand our human role to serve creation as God has modeled for us. As people of God, we must carry out our calling to care for creation through principles of vision, hope and justice as described in the ELCA social statement on Caring for Creation. It is through our sin and captivity that we have contributed to the urgent crisis of the world: climate change.

Our changing climate only continues to intensify our world’s tribulations including floods, wildfires, droughts and intensified storms, driving global migration and civil conflicts while intensifying hunger, poverty and natural disasters. These climate burdens, while felt by all, are not equal. Some of us who have contributed the least are feeling the most intense effects of climate change. As God’s people, we are compelled to act on climate with and on behalf of our neighbor and for the wholeness of Creation. It is our vision to embody a “flourishing creation” that is not burdened by the issues of climate change. It is our hope, that as people of God, we can imitate God’s care for creation by demanding a legislative response to human-induced climate change. Finally, it is justice that shall guide us in decisions made about our environment in the interest of all creation.

A Step in the Right Direction

While the Inflation Reduction Act of 2022 is by no means perfect, we can celebrate this historic achievement to address climate change. It did not include poverty-cutting provisions that we had advocated for like enhancing the Child Tax Credit and paid family leave. Yet it is the beginning of a new, less carbon-reliant nation. It is a hope for a new kind of world that better honors the integrity of creation and prioritizes an acceptable quality of life for present generations without compromising that of future generations. It is a testament to the work of those who have spent tireless hours advocating for creation, including many who’ve taken actions through the ELCA Action Center, and those lawmakers who received our cries for change. It is a step in the right direction.