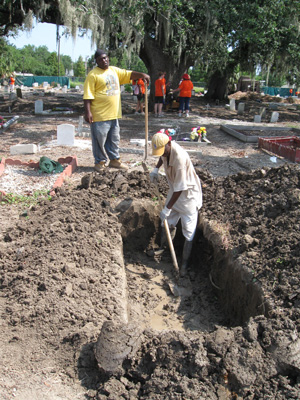 The cemetery is named for a slaveowner who purchased the land as a burial ground for slaves. At the time, the location was in the middle of nowhere — far away from the high life of the French Quarter.

Since then, the city has grown up around the cemetery, which continues to be used as a potter’s field for African Americans. People who cannot afford a funeral or without families are buried here.

Caskets are reused. They’re also all wooden to enhance decay. After a year and a day, the bones of the deceased are wrapped and moved forward to make room for another body.

Many of the names on the wooden headstones are washed away. Those with the names still visible, contain long lists of the people sharing the burial plot.

The cemetery has long been a forgotten, neglected place. Not long ago, it was so overgrown with tall grass and weeds that the graves weren’t visible.

Diane Simpson, a 52-year-old ELCA member from the Holy Family congregation in Chicago, could hardly absorb the condition of the cemetery.

“I just don’t have words,” she said. “I’m saddened. People who die deserve better. Their bones deserve more than a plastic bag.”

Bogart Nomad, a youth director from First Lutheran Church in Blair, Neb., said he never imagined a service project in a cemetery. But he and the teens in his group felt blessed to have an opportunity to help at the site.

“We signed up for a housing project, but we like this,” he said. “I just met a woman in New Orleans who said her family was here. That makes this personal.”

In New Orleans, most people are buried above ground because of the proximity to the water. Holt Cemetery is the city’s only “below-ground” burial site. The fancy cemetery above is one of many near Holt.

When the levees broke and water poured into the city, many of the grave markers were lost or uprooted. Bones of some of the dead also washed up. On the day the ELCA teens were there, a middle-age woman wandered around the cemetery searching in vain for family members.

Olivia Wedegaertner, 14, of Raleigh, N.C., discovered a human skull as raked brush from graves. At first she thought it was a rock.

“We blessed it and reburied it,” she said.

Wedegaertner learned earlier that morning that her Youth Gathering service project would be working at Holt. She didn’t know anything about the cemetery. Like many of the teens on her bus, she thought cleaning up a graveyard sounded “gross.”

Then she saw the condition of the graves. She learned about the cemetery’s history. She thought about how the people first buried here were consider the lowliest of the low — disposable, like garbage.

She heard that many died terrible deaths because they couldn’t afford medical care. She learned that many buried at Holt today are young people lost to violence.

She was reminded of Jesus’ death and burial.

“This is holy ground,” Wedegartner said. “We are helping people who are not longer here to help themselves. We are giving them dignity. We’re trying to be respectful.

The woman in the yellow blouse is Bobbiann Lewis. She teaches death education at a community college near Holt Cemetery. Two years ago, the cemetery caught her attention. The site broke her heart.

“Everybody deserves a decent burial,” she teaches her students. Now, in fall and spring semesters, the students help her clean the cemetery. In the summer, she devotes full time to the effort.

Lewis isn’t paid and doesn’t run an organization. The cemetery is a cause she took on single-handedly because she felt God calling her here. Not only is she doing what she can to make the cemetery better, she often ministers to those burying loved ones here. She tells them that God loves them and truly cares. She offers words of hope and, perhaps, a hug.

Lewis can’t do the cemetery upkeep herself, which is a constant worry for her. She prayed for God to help her find a way. Then one day, she received a call that hundreds of Lutherans — most of them teens — would spend three days working at Holt.

“I was just one fish,” Lewis said. “Then Jesus multiplied my efforts with all these Lutherans. They are the loaves and fishes. They understand that this is not just about cleaning up a cemetery. People are hurting here. This is where the metal meets the road.”

Above, Lewis talks withKaty Nowicki, 19, of Oconomowoc, Wis., a member of the “Dream Team” of Youth Gathering servant companions. In her role, Nowicki acted as a liaison between the youth workers and Lewis.

“People on the bus gasped at first when they learned what they would be doing,” Nowicki said. “But nobody freaked out. Then when they saw the cemetery, they wanted to help. They understood that nothing gets done at this cemetery without volunteers. Everybody is working very hard.” 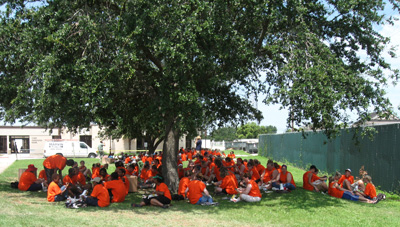 At lunchtime, the youth clustered under the nearest tree for a bit of shade and relief from the heat. Many of them discussed graves they’d seen. 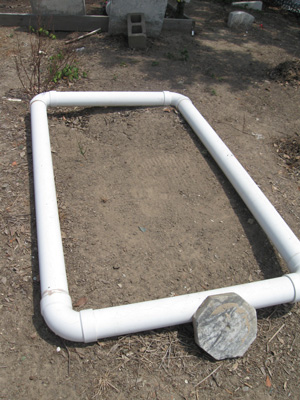 Like this one. The grave area is marked off with pipes because that’s what the family could afford.

Another grave is marked off with a little wooden fence.

This grave, marked by concrete slabs, contained several tombstones of the dead believed sharing the plot.

Many families cannot afford permanent headstones for their loved one. This family created a marker from Styrofoam.

This grave caught the attention of many teens. They wanted to know about the chairs and “other junk” piled on the site.

Lewis told them a homeless person had been buried there. Her family piled her things atop the grave “to appease her spirit in hopes that she’ll stay there.”

Lewis, a Christian, said she often finds signs of voodoo rituals in the cemetery, as she did this day.

The teens finished the day out, then another group came the next day. They served three days in all and “resurrected” the cemetery, Lewis said.

She called me at the end of the third day crying, but full of joy.

The grave diggers aren’t as optimistic. “If this isn’t an ongoing effort, the weeds will all grow back and it will be just like it was before,” Ernest said.

Lewis said God provided the Lutherans and trusts that whatever provisions needed in the future will be given, too. In the meantime, she’s looking into grants that may help in her efforts to maintain dignity at the historic site that’s still used for burial.

“If the Lutherans want to know whether these teens made a difference in New Orleans, they need look no further than here,” Lewis said. “You have given the people hope. You have done just what you say you do. You have been God’s hands.”

For my ELCA New Service story on the day, go here.

LutherTube: Soundbites | A change of heart