I spend months and months planning before we leave for a Gathering, after I have thought and prepared and over-planned, I lay awake at night…Will they all get along? Will we bond as a group? Will this be worth it?

We start out nervous and excited but then at some point in the first few days there is this “magic moment.” It’s hard to describe and it always happens when I least expect it. That moment when we shift, the group finds a rhythm and we create community. My heart swells to even think about it. 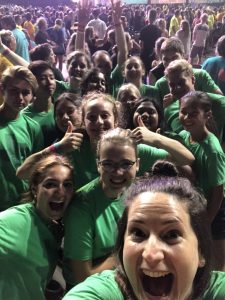 I have this snapshot in my head of each time it has happened. It doesn’t just happen once, it happens over and over again. The first night we walk into Mass Gathering and the youth see thousands gathering, they realize that this is their community. When they are singing, arm over shoulder, swaying on the floor of the stadium with new friends: community. When they walk through the streets of an unfamiliar city and high five a youth from another state far away: community.

They are deeply impacted by this mass expansion of their circle of community and that word takes on a whole new meaning. They make new friends in an instant and connections that change the course of their lives forever! Life altering connectedness and community!

These connections to each other and the larger community are priceless, the changes to the youth, profound. When we return home, we aren’t just people in a group, we are a community, connected to a much larger community than most of them had ever realized. They belong, maybe for the first time in their lives, forever woven into this community and it changes everything.

Elizabeth has served her congregation in California for over 10 years, loves camping and traveling around the world. She also leads the Hospitality Team for the Extravaganza and serves on the planning team for the Western States Youth Gathering.