Dana Nelson is an ELCA missionary in Lima, Peru. To support Dana, or another of the ELCA’s nearly 250 missionaries, go to www.elca.org/missionarysponsorship. 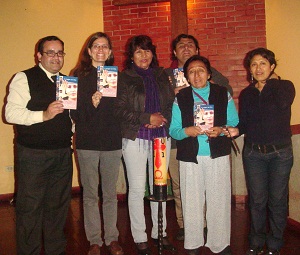 Among the participants of a recent workshop on domestic violence was a woman, third from the left, who had been attacked with boiling water.

Domestic Violence is a serious issue all over the world as we know.  Peru, where there is a lot of machismo, is no exception.

I am thrilled to have found an excellent program to prevent and stop domestic violence in Peru. It is called Alto a la Violencia (Stop the Violence). In the Peruvian Evangelical Lutheran Church, we have hosted, so far, three of these trainings.

The photo included here is a small group that gathered in Cristo Rey for a workshop.  The tall woman in the photo (third from left and next to me) survived her boyfriend pouring a huge pan of boiling water over her face and body when she was sleeping. Now that she has recovered and healed, she is speaking out, teaching others in Lima what to do if they are in violent relationships, how to get help, how to be safe, how to seek justice and protection, and know their rights as human beings.

In St. Paul, Minn., before I went to seminary, I worked for a time as an advocate in the Latina organization Casa de Esperanza in their domestic violence shelter. I am passionate about ending domestic violence in the world and grateful that God has called me here to Peru to continue this struggle in a small way.

God bless the people of the Alto a la Violencia project as they carry on their important work! They do such good and effective trainings that there is talk of replicating the project in other South American countries.

Have a wonderful new year! Que Dios les bendiga mucho. Thank you for your prayers and support.

Next Post: New pastors and a new year in Singapore »