Posted on February 4, 2010 by Franklin Ishida 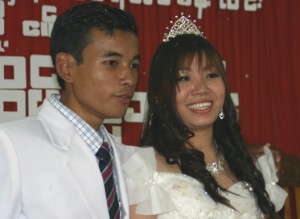 James and Mariam at their wedding

January 18 was a big day for James and Mariam. In Myanmar (formerly known as Burma), where marriages are not officially recorded, their church wedding was a significant witness to the wider community. And it was a mission moment as well, a time to celebrate the wider connections of the church. Lutheran Church in Malaysia Bishop Philip Lok was invited to preside and Lutheran Church in Singapore Bishop Terry Kee preached. Their presence added to the celebration, shared not just with church members, but with non-Christian friends as well.

James is a pastor of the Myanmar Lutheran Church (MLC), an emerging church that serves primarily among the Khumi-Chin people of Myanmar. James’ father died when he was young. “You are nothing without a father,” he had been told once. And with his mother suffering from a stroke, he was further told there was no hope for him. But he was determined to serve God, and it was Miriam’s father, head pastor of the MLC, who inspired James in his faith, leading him to a call in the church.

In a predominantly Buddhist country, James and Mariam will certainly continue to witness to the gospel with their youthful energy.