Walking with the risen Lord: An Easter Devotion

Only Luke tells this story of Jesus’ tender patience: “Then beginning with Moses and all the prophets, he interpreted to them the things about himself in all the scriptures” (Luke 24:27). Later, their eyes were opened when Jesus blessed, broke, and gave the bread.

We have not yet walked the road to Emmaus, but we, and the people we serve, have walked plenty of stony roads in and around Jerusalem. Daily, we walk through 3,000 years of biblical history. At the same time, we participate in some of the pivotal events that will be reported in tomorrow’s international media.

We walk with people who grieve the loss of their precious homeland and now endure the incessant humiliations of occupation. We join in the struggle for peace and justice in a climate often simmering with vengeance and retribution. Most of all, in faith, we walk with the risen Lord who continues to be revealed when scripture is opened and bread broken. He is the one who brings life and sets us free. 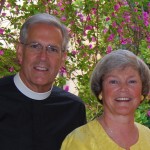 The Rev. Mark and Marcia Holman are ELCA missionaries. Pastor Mark serves as pastor of the English-speaking congregation at the Lutheran Church of the Redeemer in the Old City of Jerusalem. Marcia serves to strengthen community life among the women and men called to serve in Palestine.