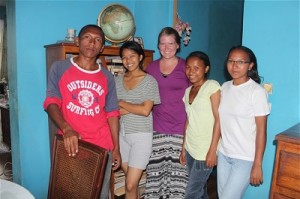 Madeline Thomas, center, with some of her Madagascar friends.

​Madeline Thomas, who is serving for a year in Madgascar with the Young Adults in Global Mission program, describes how “accompaniment” is a part of her daily life. To support Madeline, go here.
To support another of the more than 240 ELCA missionaries in the global church, go
here.

One of the key objectives of the Young Adults in Global Mission program is accompaniment. We talked at length during orientation about what it means to walk with others throughout this journey. During one devotional, we acted out the walk to Emmaus, and I wrote in my journal that night a note to my future self: “Sometimes accompaniment isn’t walking hand in hand into the sunset, it’s stumbling around with your ankle duct taped to someone else’s!” In my small group we also talked about what it means to accompany yourself. And while there have certainly been some stumbling moments and long solo walks, I have been amazed at the accompaniment I have experienced.

As many of you know, my host mom, Lucie, has breast cancer. (Thank you for all of the prayers, she is currently feeling much stronger and healthier!) So when I first arrived she had a difficult time getting around by herself. Walking up the big hill behind our house was really tiring. Whenever we would go somewhere as a whole family (usually church), she would have someone hold her purse and someone else would walk by her side. From the very first week, she would always hold on to my arm as we climbed the hill. At first I was nervous I would trip on the cobblestone and we would both fall, but slowly we made it up the hill and along the road to the bus stop. And I noticed that fewer people in town made comments about me being a foreigner when Lucie and I walked together. So now whenever we go someplace together, we support each other, she is supported physically when my arm says “I won’t let you fall and I will walk as slow as we need to.” And I am supported emotionally when her grip says “I trust you and you belong with me, you’re a part of my family.”

A few weeks ago I was leaving to walk home after the church lunch program, TCC, that I help with twice a week. A grandmother volunteer and her two grandkids about ages 4 and 7 were also leaving, and they asked where I lived. When I told them the name of my neighborhood, they explained that their house was on the way, and they could walk with me. As we prepared to cross the busy street, I looked down to find the 4 year old grabbing my hand. By the time we made it to the other side, her older brother’s hand had also found its way into mine. Their grandmother joined our little brigade and together we made our way home. An unlikely team of three generations, two nationalities, and three languages was easily bridged with smiles and interlocking fingers as we walked side by side, avoiding oncoming taxis, chickens and mud puddles.

I recently started going with my host parents to what I call “house church,” a small gathering of friends who take turns worshiping at each other’s houses two Sunday afternoons per month. One Monday I was walking home in the late afternoon, rushing to arrive before the storm clouds, when I suddenly heard my name being yelled from the other side of the street. I looked across to see a family from the house church that I had just met the day before. I crossed the street to greet them and they asked where I was going. They were also walking home but in the opposite direction. They were over halfway home, and I still had a 25-minute walk. But in the span of a few seconds it was decided that the parents would continue home and the two daughters close to my age would walk with me all the way back to my house and then take the bus home. So Tiana and Narindra turned around and happily walked in the direction they had just come as we chatted and got to know more about each other. It was so nice to have company and people literally going out of their way to accompany someone they had just met.

Next Post: Jane and Ted Zimmerman: Service in Hong Kong »