Getting settled in Japan 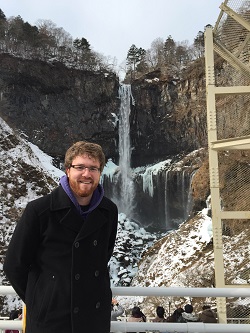 It’s been close to three months now and it’s almost time for me to make a second move. For the last three months I’ve been living in Tokyo. In early January, I will be moving to Kumamoto, which is in the southernmost province of Japan. Provinces are similar to our states. I will have three more months of orientation and training. In April the new school year begins and so I will begin to teach.

During my time in Tokyo I’ve tried to do a bit of sightseeing. I’ve gone to a couple local Shinto temples near my apartment – very, very cool. I’ve walked around some of the more populated areas like Shinjuku and Shibuya, comparable to Times Square in New York. I’ve also visited what I would consider the most well-known Shinto shrine, Meiji Jingu (Meiji Shrine) and walked the incredible gardens next to the shrine. Meiji Shrine was built in the early 1900s to commemorate Emperor Meiji for his involvement in the Meiji Restoration. This was a series of events that restored practical imperial rule to the Emperor in 1868. It also helped Japan become the more modern nation that it is today.

There are many more places I will try to visit while here in Tokyo. One trip that I’m planning to take is to a small town just outside Tokyo called Nikko. It is famous for its very fancy and decorative Shinto shrine, one of the largest waterfalls in Japan and its hot springs. I’m hoping to visit sometime after New Year’s. [A trip Zach did make. See the photo above.]

Along with getting to be a tourist while here in Tokyo, I have had Japanese language courses twice a week. The sentence structure of Japanese is backwards compared to English, but that isn’t the difficult part. I just need to keep studying the vocabulary. It’s slowly but surely getting better. One thing I have been doing to help my lessons along is meeting with a gentleman I’ve gotten to know at church. I’ve been meeting Akira-san almost once a week. We have coffee, talk about life. I try to use Japanese when I can and he practices his English. I’m hoping to keep up language study once the school year starts even though it is not required.

One of the host organizations for the ELCA mission program in Japan is the Japanese Evangelical Lutheran Church. I am, of course, to take an active part in a congregation. While in Tokyo, I have been attending Ookayama Lutheran Church. Attending this church and being with these people has been one of my favorite things thus far. There are a few people who speak English, which at first helped with getting to know people. But the whole congregation has been very welcoming. This last week the kindergarten associated with the congregation had its Christmas program, and they asked me if I wanted to be Santa Claus for the program. It was a lot of fun getting to see all the kids and be a part of their Christmas. Afterwards I went out to lunch with the pastor and the teachers. The catch was none of them spoke any English and my Japanese is so minimal that it is still hard to communicate.

Even with little to no communication, it was still a very fun time. I’m sad I will be leaving this congregation soon to move to the prefecture of Kyushu, but I am excited to start the next part of my journey.