Bradn Buerkle is an ELCA missionary in Novosibirsk, Russia, working in parish ministry. He comments here on the synod assembly he recently attended. To support Bradn, or another of the ELCA’s over 200 missionaries, go to www.elca.org/missionarysponsorship. 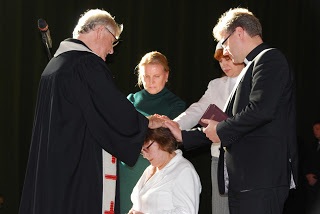 The installation of Tatyana Serebrova as head of women’s ministries.

In the U.S. the number “21” is almost immediately associated with the age at which young people are no longer legally considered minors. By that time they should have reached a certain degree of maturity, society has determined. Attending the 21st synod assembly of the Evangelical Lutheran Church in the Urals, Siberia, and Far East on Oct. 12-14, I could see that the same can be said of our church. On its 21st birthday, there is already a lot of life experience to look back upon — miraculous developments, tragic mistakes. And all of it now can be seen in the light of moving toward spiritual maturity.

This synod assembly saw me “maturing” into my call by giving a sermon at the opening worship and being made acting dean (“probst”) of the Central and Eastern Siberian Deanery, but much more important was what I saw and heard from others there — the founding of new congregations in the Urals, the pursuit of theological education by people in the Far East, the ordination of a young man from Omsk, Vladimir Vinogradov, who grew up in their Sunday school, and the installation of a local leader for women’s ministries, Tatyana Serebrov, just to give a few examples.

As with any 21-year-old, there are probably even more challenges lying ahead than behind. This church will continue to grow into maturity as it strives to work on stewardship, questions of theology and liturgical practice (Holy Communion was noted as an area that the pastors will look at during their meeting in the spring), as well as congregational redevelopment in those places that have not been able to adapt to the changing situation here in the past two decades (most especially the emigration of large numbers of German Russians).