Barbara Robertson recently explained some of the work she does as an ELCA missionary in Tanzania. Much, but certainly not all, of that work is educating people about preventing AIDS. To support Barbara, or another of the ELCA’s over 200 missionaries, go to www.elca.org/missionarysponsorship. 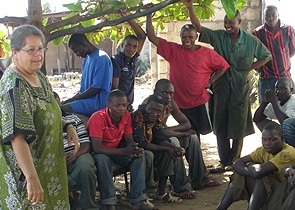 I have lived and worked in Tanzania since 1999. I am at my second work station (Morogoro) and have been here since 2006. These 6½ years have flown by rather quickly.

My official position is HIV and AIDS program officer and I am based at the diocese’s headquarters in Morogoro. Our diocese’s primary HIV focus is prevention through education. I am a department of one and work in cooperation with other members of the diocese — pastors, parish workers, evangelists, etc. Over these past six years, we have educated hundreds and hundreds of people. (Actually, in truth, thousands and thousands have been educated, but I’m not very good at blowing my own horn.)

In the earlier years, the main topic was how one was infected and the way the virus worked. Caring for the sick was always included, as those caring for infected people were scared to death they would be infected. For the first three years, my work focused on educating women, as they are the most infected and affected by HIV and AIDS.

In the past 2½ years, we have shifted our focus to youth and young adults. It has been very rewarding work. And I have seen a change in attitude over the years. One of the most apparent is the change of attitude in the area of testing. Far more people know their HIV status now than even five years ago. And young adults are much more willing to know their status.

In Tanzania, HIV is a very cross-cutting issue. One can do just about anything and it touches on the topic of HIV. Knowing that, you will not be surprised then that I have also done a lot of work with one of my colleagues in advocating for the end of female genital mutilation and cutting. There are a number of ethnic groups in the area that still practice this ritual.

Grace and peace be with you!
Barbara Robertson