‘Today, we have made history!’

The Rev. Dana Nelson and Thomas Ososki are ELCA missionaries in Peru serving in parish ministry. To support Dana and Thomas, or another of the ELCA’s 225 missionaries, go to www.elca.org/missionarysponsorship. 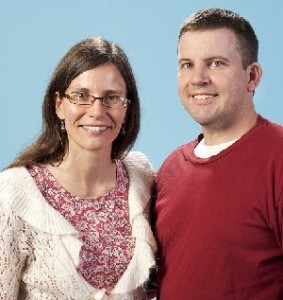 Grace and peace to you from Lima!

We had our first ecumenical wedding in the Peruvian Lutheran Church (ILEP) this spring. In Peru, it is not easy to find a church that will marry a Roman Catholic and Protestant couple. I know that may sound strange, but, unfortunately, there is still a big divide between many “catolicos” y “evangelicos.”

Maria del Pilar and Franklin, two bright, talented, young people, knocked on the door of Cristo Rey because they heard the Lutherans are “open minded” and would welcome them just as they are, and respect and honor the religious histories and traditions of their two families. At the same time, they were concerned about what Franklin’s family, especially his brothers, would feel about having a woman preach in church. They admitted that at age 37, they had never seen a female minister administer sacraments before until they started coming to the Lutheran church.

So after a few weeks of searching, and about fifty phone calls, we found, thank goodness, a priest, Father Diego, who was comfortable with the idea of this “mixed marriage.” He had served as a missionary priest in countries outside of Peru, so it was not so strange for him. In fact, when asked if he would be interested and willing to co-officiate the ceremony (for the sake of Franklin and Maripili and their 400 guests), Padre Diego actually said he would be “encantado” (delighted, enchanted) to participate. It was so much fun! We had a long and elaborate ceremony with Holy Communion and everything (because that’s what the couple wanted) and when it was over, and the guests filed out of the church to go on to the reception, Maripili and Franklin, with big smiles on their faces, said to Padre Diego and me, “!Hoy hemos hecho historia!” “Today, we have made history!”

So to be a Lutheran missionary in Peru is very special. The Peruvian Evangelical Lutheran Church has always promoted ecumenism, inter-religious dialogue, and above all gender equality. In fact, when the church was first formed, and the first Peruvian national pastors were ordained, three of the five were women.