The Rev. Arden Haug, an ELCA missionary in Wittenberg, Germany, is also the regional representative for Europe. To support Arden, or another of the ELCA’s 225 missionaries, go to www.elca.org/missionarysponsorship. 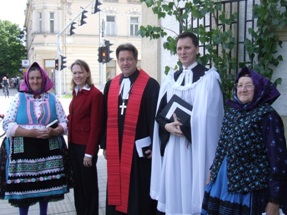 Although I moved to Wittenberg, Germany in February to take on the responsibilities for the ELCA Wittenberg Center, I still travel across Europe representing the ELCA to our Lutheran partners. I Often  visit places where few people are aware of the Lutheran community. Indeed, we don’t often imagine Lutherans living peacefully in the lands of the former Yugoslavia. But in northern Serbia, there still exists a unique territory known as Voivodina where diverse religious groups live together. The territory had once been conquered by the Ottoman Turks in 1526 and was under their control until the Austrian Habsburg Monarchy captured the land in 1699. Since the Austrians were staunchly  Roman Catholic and were still anxious about the Turkish desire to reclaim the land, they opened the land to Protestant believers. In 1770, Slovak Lutherans left the Tatra Mountains to begin a new life along the Turkish-Austrian border. The emigrants wanted to establish an evangelical church where they could freely express their faith. Stara Pazova was the first Slovak Lutheran congregation established in Voivodina.

From the outside, the Evangelical Lutheran Church in Stara Pazova looks no different than most of the historic church buildings that dot the landscape in Voivodina. The emperor in Vienna ordered that all churches should look the same regardless of whether they were Lutheran, Reformed, Roman Catholic, Greek Catholic or Orthodox. Oddly, in other parts of the empire, Lutherans were not allowed to have a church tower, but here this was acceptable. But it isn’t the outside of the church that is so fascinating.  It is the community and the worship practices inside that are worth studying. It was my great pleasure to preach on Pentecost in Stara Pazova.

Many old traditions are still a part of their worship life. In parts of Europe, newly cut birch boughs often adorn the church for Pentecost. Sometimes it can feel as if you are entering into a forest. In Stara Pazova, fresh cut grass was strewn across the sanctuary floor as well. Slovak women dressed in traditional costumes stood in the front of the church leading the singing, and this is very important since nearly the entire worship service is sung. Perhaps the other surprise is the seating. Men and women still sit in separate parts of the sanctuary.

I later showed a photo a similar to the one above to a young Serbian pastor and asked him if he saw anything interesting.  He noted that I was wearing a black robe instead my usual white. But the women were dressed as they usually do. For the people of Voivodina these sights are so common that it was only me marveling at the wonder of God’s church on this Pentecost Day.