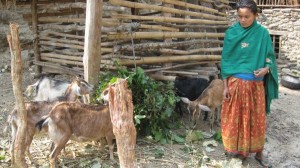 Man Kumari lives in the bank of a river in Hudgikhola (Nepal) with five children. Her husband disappeared from home for an unknown reason several years ago, leaving all five children in Man Kumari’s care. Her oldest daughter Sarita, 15, works in a local restaurant and attends school in sixth grade.
Man Kumari, inspired by Shanti Nepal, an ELCA partner, enrolled herself in school in the fifth grade. She participated in income generating training offered by Shanti Nepal. In addition, she joined the cooperative and saved money. She took a loan to buy goats three years ago. When I visited her small make-shift shed, she proudly showed her four goats she has been waiting to sell. She told us that often she is subject to harassment by the local officials for occupying government property and threaten her with eviction. I had to cross a river when I went to visit her. She helped me by pulling heavy boulders to make sure that my shoes and clothes do not get wet. She put her school uniform when I wanted to take a picture. 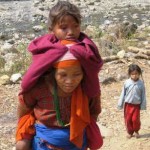 While I was on my way to Man Kumari’s house, I saw a women walking through the river with a small child on her back. I asked where she was going. She said her daughter has fever from last night and she is taking her to a nearby heath post. She looked very tired and exhausted. I asked how far she walked. She said she walked for three hours through hills and rivers to come to that spot because there were no other health facilities available anywhere nearby. Later, I visited the health post as Shanti Nepal provides medical supplies to this health post and saw the women waiting with her child to get her turn to see a paramedics.