The Rev. Mark and Linda Nygard are ELCA missionaries in Egypt. Mark is the coordinator of graduate studies at Evangelical Lutheran Seminary in Cairo. 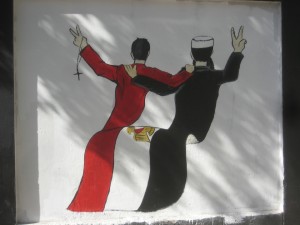 An Egyptian flag morphs into a Christian priest and a Muslim imam.

Happy Easter from the East.

On a wall across the street from the seminary there is a clever painting of an Egyptian flag that morphs into a Christian priest and a Muslim imam, embracing each other with one hand and making the sign of victory with the other.  The red part of the flag  is really the priest’s robe, and the black part turns out to be the imam’s, while the white in the middle with the Egyptian eagle upon is, in fact, actually the link between them.  I take it as a prophecy of new religious friendship and respect in a land that has been too often troubled by interfaith hostility and violence.

This prophecy has been struggling for shape in the past few months.   After the New Year’s church bombing in Alexandria, Mariam in the seminary’s international office told me that, the following Sunday, Muslim neighbors had come to her congregation, offering chocolates to worshipers on their way in and actually sitting through the services with the congregation.  It was as if to say publicly, “We Muslims share your sorrow and fear,” and, “If anybody tries to bomb this church, they’re going to take Muslims with them!”

Some of you were watching the demonstrations on Tahrir Square during the revolution when Christians responded in kind.  When we show that kind of respect for each others’ convictions, maybe we’ll find fresh ways to hear and speak these convictions across social barriers.

One of our convictions is that we have a Lord who died for us and rose from the dead.  That conviction was widely celebrated in Egypt this past week. Perhaps most memorable was a Presbyterian Good Friday service we attended in Giza that was supposed to run from 11 a.m. to 4 p.m., concluding with a potluck.   Our hostess knew about low levels of Western endurance, so she invited us to come just for the last hour and then eat with them.  As the last speaker got up to speak about 4:00, she was translated, “I know you have been sitting for a long time, now, so I won’t keep you.  We’ll limit ourselves to 17 hymns!” There was mild amusement at the joke, but it was only half a joke. Eight or 10 hymns later, each punctuated by another word of grace, we Americans straggled out, 45 minutes late.  Gasp.  There’s no question that here are people committed to the climactic News of the Day and in no rush to move on to other more mundane affairs!

Sincerely yours,
Mark and Linda Nygard

Next Post: Online courses to break new ground in Mexico »