Susan Smith, an ELCA missionary to the Central African Republic, worked for more than 30 years for the Pittsburgh public school system. As a missionary, part of her work is supporting and assisting the Village School Program. In the program’s June newsletter she gave on overview of the program, which the ELCA helps support. Due to political unrest in the country, she is currently based in Garoua Boulai, Cameroon. To support Susan, or another of the ELCA’s over 200 missionaries in the global church, go to www.ELCA.org/missionarysponsorship. 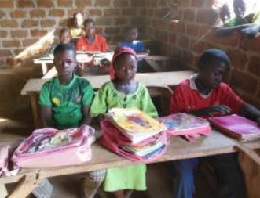 Students use a classroom provided by the Village School Program.

The Village School Program started about a dozen years ago to help fill a gap in the national education system. Not every town has an elementary school even though the law says that all children must attend school. There is just not enough money to build all the necessary schools and to hire the teachers. So, in response to these needs, the Evangelical Lutheran Church of the Central African Republic created schools in towns that did not have a government school.

Starting with five schools, there are now 20 primary schools that begin with kindergarten and continue for six years. Classes are generally large — ranging from 20 to 95 students per classroom. Teachers also generally teach two grades, so each school usually has three teachers. Classes follow the curriculum used in public schools and developed by the national education office for primary education. The Village School Program supports the schools and teachers by helping them to organize parent organizations, visiting classrooms to give teachers feedback on their work, providing exams each quarter (used in all schools), compiling the results of those exams, and generally helping run the schools.

Parents pay half of the teachers’ salaries and the Village School Program pays the rest. Parents are also responsible for building temporary classrooms (which have wooden supports and a straw roof.) The goal is also to build permanent buildings. While the ELCA will provide much of the funding for construction, parents are responsible for collecting stones and sand. They also make mud bricks.

So, in all, the Village School Program educates over 3,000 students. The schools often have a better reputation for quality than the nearby government schools.