Rejoicing for the roofs 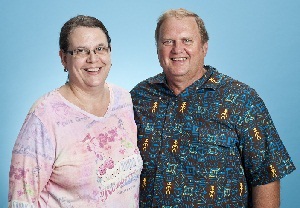 The church truck just got back from Ouli five days ago. Denis hauled all the materials for the roofs of the churches in Mbengetiko and Ouli dropping Bello and Bernard off with the tools to build the roofs on the two churches there. They took the roofing sheets and other materials along with the tools from here about 10 days ago. When they reached Bertoua they picked up the wood that Gouroudja had purchased a couple of days earlier. By the time they got close to Mbengetiko where they were going to drop off the first set of materials it was getting dark.

Denis said that the road was fixed up from the last time that he went down that way and he didn’t even recognize the turnoff to get there. So they started asking and the word got out that they were on the way. Several kilometers outside of Mbengetiko they were flagged down by a man, and he rode on the truck shouting out that the materials for the church were finally arriving. By the time they got to the church there was a large crowd there singing and dancing with joy. It was at that time that Denis called me to tell me they had arrived. I could easily hear the singing in the background, and Denis had difficulty hearing me on the phone.

The town wouldn’t allow them to continue that night even after they had unloaded the material for their church. So they stayed overnight and left for Ouli the next morning, to unload and start there before returning to Mbengetiko. Yesterday they said they had a couple of days left in Ouli before finishing that first of the two roofs. Then Bello and Bernard would be returning to Mbengetiko to work on that one.

It was the ELCA South Dakota Synod that financed these two church roofs. This is cooperation between the people in South Dakota and the people in each of the churches out here. It is the responsibility of the local congregations to build the walls out of permanent materials (either burned brick stone or cement block for the walls with a solid foundation). South Dakota’s part comes in when they pay for the corrugated aluminum roof, which runs anywhere between from $7,000 to $10,000 a roof. Bishop Thomas Nyiwe of the Evangelical Lutheran Church in Cameroon tells me that there are still over 25 churches waiting for roofs.