The Rev. Bradn Buerkle is an ELCA missionary serving in parish ministry in Novosibirsk, Russia. To support Bradn, or another of the ELCA’s 225 missionaries, go to www.elca.org/missionarysponsorship. 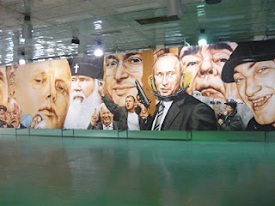 The paradoxical nature of Russia was captured in the recent art exhibit "Rodina" ("Motherland,") which opened at the end of May after twice being banned.

It is appropriate that the holiday named “Russia Day” is one that provokes ambivalent or even paradoxical reactions among those who live in the nation for which the holiday was named. It couldn’t really be Russia Day otherwise.

While June 12 was never officially “Independence Day,” that is what many people called it for a number of years. And they asked themselves – “Independence? From what? From whom? Wasn’t it better to be together (even with tension) than to “enjoy” the kind of “independence” we have now?”

And now, more than 20 years after the fall of the Soviet Union, on a day that was intended to invoke national pride and be a signal of a new way of organizing society, some opposition leaders and ordinary citizens are being harassed just because they want to make their voices heard. On the other hand the country is working hard on many fronts to improve its image and the standard of living of its citizens. There are many, many ways in which Russians can now truly celebrate independence.

Paradox exists both on the level of society as a whole and on the level of interactions between individuals. I’ve frequently been surprised here both by the way upstanding people could be openly aggressive and offensive, while I’ve had some of my most interesting (and sometimes quite intellectually and spiritually challenging) conversations with those who are drunk or who live a life of crime.

The fact that this country is full of paradox is why I was attracted to it from the beginning. Russia provides no simple answers. In fact, it is much better at supplying no answers at all but instead dwelling on the “eternal questions” – “Who is to blame?” “What is to be done?”

Because of this, very little is settled and stable here. As a consequence, few people experience a true and deep happiness. Even as a guest in this country, I am not immune to this situation. And, of course, Russia’s complicated past and paradoxical present affect the life of the Lutheran church here as well. We as a church still do not “fit in” in so many ways, and it sometimes feels like Lutheranism could fall between the cracks of all of Russia’s contradictions.

Yet, maybe we don’t need to fit in exactly. Maybe it is enough to share a love for the questions and to avoid the easy answers. We might not be happy, but we are authentic. And true to life, with all its paradoxes.

That is what I will be celebrating as this “Russia Day” draws to a close here in Siberia.