The Rev. Rafael Malpica Padilla, executive director for ELCA Global Mission, sent this post during his visit in Malaysia and Singapore.—Sue

Reacting to the communist takeover in China, in the late 1940s the British government in Malaysia relocated the Chinese population to “New Villages” to the north of Kuala Lumpur in the region of today’s Ipoh.

Beginning in 1953, missionaries from the ULCA and LCA (ELCA predecessor church bodies) served the Chinese community in these villages. They engaged in “pioneer evangelism,” planting the seed of the Gospel and laying the foundations for strong congregational ministries.

These seeds found good soil and helped to root the Lutheran Church in Malaysia and Singapore.  For example:  The Rev. Philip Lok, born in the new villages and educated in the mission schools, is bishop of the church.  The leaders that were formed by our missionaries now direct the evangelical outreach in their lands.

At its August 2009 convention, the Lutheran Church in Malaysia and Singapore received five congregations into membership. These are congregations among the Orang Asli, the people of the land. 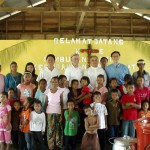 On October 8, 2009, I visited one of these communities in Kampong Sekau. That morning 14 people were baptized and 12 confirmed. We gathered around water, bread and wine to witness to God’s mission of creating and sustaining community.  Made one by the Gospel of Jesus Christ, and overcoming cultural and linguistic barriers, we worship together in the Semai language.

The Lutheran Church in Malaysia and Singapore and the Evangelical Lutheran Church in America walk together as companion churches.  Together, we reach out with the good news of the Gospel.
Soli Deo Gloria! —The Rev. Rafael Malpica Padilla