“We are people, all just people” 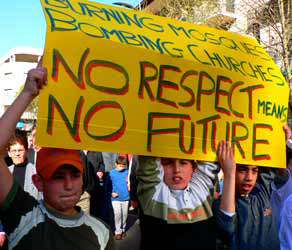 A rally in Nazareth gathered thousands to protest against a desecration of a church in 2006. Photo: Rev. Julie Rowe.

As an ELCA missionary, I lived in Jerusalem four for years, serving with Palestinian Lutherans.  I lived and worked among Palestinian Muslims and Christians.  Most of them showed incredible hospitality to me and other Americans, making important distinctions between citizens of a nation and the impact of that nation’s policies.

Despite daily oppression and extremely harsh living conditions, my Palestinian neighbors were gracious and generous.

I remember my neighbor, Muhammed.  He had to get up three hours early during Ramadan to cross the checkpoint into Jerusalem to be at work on time, yet always went the extra mile to help me.

I remember Ibrahim, who opened his house and hospitality to all who needed a place to stay.

I remember Khalid.  I met Khalid, a Muslim, after we both found out we were trying to help a Christian woman who had little money and no place to stay.

When I met her, I suggested a few places near Redeemer Lutheran Church in the Old City of Jerusalem, where our offices were, and she said, “Oh, I couldn’t stay with them.”

“Arabs.  Muslims.  They’re dangerous and not Christian,” she replied.

I asked her if she realized she had come to an Arab church for help.  Three days later, I arranged for her to meet the man who had been helping her.  She never showed up for the meeting, but Khalid did.  She had gratefully accepted his help until she found out he was Muslim.  She then disappeared from our lives.  Khalid sighed, saying, “I don’t even ask whether someone is Muslim or Christian or Jew.  I just try to help.  If they need help, I help. We are people, we are all just people.”

One Response to '“We are people, all just people”'