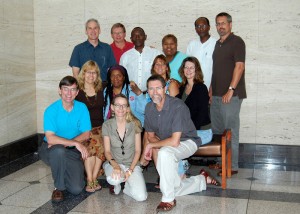 This introduction to the ELCA Global Mission Africa Leadership Team is drawn from the Rev. Viking Dietrich’s blog, “Viking in West Africa.” –Sue

The leadership team of the ELCA Global Mission Africa Desk, including Program Directors, Regional Representatives and Chicago-based staff, met in July to consult and strategize for more effective regional work.

The Rev. Barbara Berry-Bailey is Desk Director for Companion Synods.  There are 52 companion synod relationships between African companion churches and dioceses and ELCA synods.

Amy Honore and Sharon Robinson are Chicago based Administrative Assistants.  They are key to the teams efficiency, assuring logistical support and communications for the team.

Regional Representatives nurture relationships between the ELCA and its companion churches and partners in mission by being an extension of the leadership team present in the region.  They assist the Desk Directors by providing support to ELCA missionaries, offering interpretations of context, monitoring grants, and acting as a liaison between multiple partners.

As a team, the Global Mission Africa leadership group is completed by more than 30 missionaries and dozens of volunteers and Young Adults in Global Mission who live and work in over 15 countries in Africa.