Posted on February 10, 2010 by Global Mission Support
The exact year is now forgotten­––1998, maybe––when one of our ELCA sponsoring congregations decorated a shoebox and filled it with valentines, some homemade goodies and some candy for us.

Anyway, it was October when this Valentine’s Day box finally arrived in Papua New Guinea.  As I opened it up, I did battle with the ants that were enjoying the goodies inside. What the ants hadn’t claimed the tropical heat had.  Only a bag of cinnamon redhots remained untouched and recognizable.

The earthworms in the compost received all of the once-edible contents, except for the cinnamon redhots which we decided were not hazardous to our health.  We read the Valentine cards and laughed at the knock-knock jokes.

Later that day, I wrote a note to thank the congregation for their thoughtfulness.  In it, I gently suggested that it’s best not to send homemade goodies and chocolate to a place where mail service is unreliable and tropical heat and humidity are the order of the day, every day.

Three years ago we received a Valentine’s box from this same congregation. It arrived in August.  We were no longer serving in Papua New Guinea, but in the Central African Republic.  This time we found cans of tuna, chicken and shrimp…and a beautiful hand-quilted wall hanging of a heart made up of a multitude of tiny squares.  The note inside reminded us that we were in their prayers and their hearts. 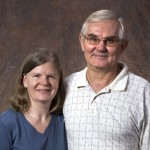 The Rev. Joyce and Ian Graue

We pass their quilted heart wall hanging many times a day.  Their gift of love continues to bring us joy.

Former ELCA missionaries Pastor Joyce and Ian Graue served at Martin Luther Seminary in Lae, Papua New Guinea (1995–2004), and served as advisors in the Central African Republic (2004–2009). Pastor Joyce is currently serving as interim pastor at Our Savior’s Lutheran Church in Chokio, Minn., while she interviews for a permanent call to serve an ELCA congregation.