Grateful to be in accompaniment with Palestinians

The Rev. Elly McHan is an ELCA missionary in Jerusalem. She describes here two recent experiences of going through the checkpoint to the West Bank, something many Palestinians do regularly. To support Elly, or another of the ELCA’s 230 missionaries, go to www.elca.org/missionarysponsorship. 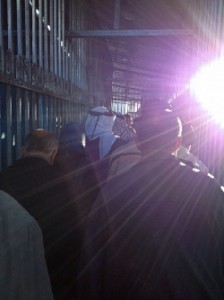 Waiting at the checkpoint.

It was nearing the end of the work day, and so the nearer we got to the checkpoint the fuller the bus became.  Soon, the aisle was filled with Palestinian day workers — tired, dusty, dirty, sweaty men who were willing to crush into the bus because that meant they would get home that much sooner.

And as we poured out of the bus, we crossed the checkpoint together.  Through one turnstile.  Then another.  And yet another.  And as we entered in the wide open, fenced-in no-man’s land, and the 30-foot concrete wall rose up above us with its barbed wire and lights and cameras atop, I was almost brought to tears as I looked at the men around who had crossed well before dawn to spend their day building for others and now were crossing over once again, voluntarily and effectively returning to what seemed by appearance so much like a prison, knowing that once that first turnstile was crossed they could not re-enter unless someone else allowed them to.  And I found myself so proud to be walking with them.

A second crossing was with three youths from the Evangelical Lutheran Church in Jordan and the Holy Land (ELCJHL).  I was so worried about getting to our appointments on time that I asked them to meet me at the checkpoint at 6:30 am. They arrived promptly on time and with smiles on their faces.

And so we started our crossing.  Through the long cattle shoot along the wall, past one soldier and down the serpentine tunnel to the crowded lines of Palestinians waiting to pass, three by three, past the second soldier in the metal-detector room, to the third and final soldier who performs a final paperwork check.

I felt so proud as our youth kept their heads high, carried themselves with dignity, showed respect to the soldiers who issued one word orders to them. But I was most moved when we came out the other side of the checkpoint and the three young people expressed pain and concern for me, for the demands the soldiers had issued to me and the time they had made me stand waiting, not knowing whether I would be allowed to cross or not that day.

Once more I was blown away by these young people who, even as I was called to accompany them, were embodying accompaniment more fully and more honestly than most any I have encountered.

I am so proud to be working with the people of the ELCJHL and walking in accompaniment with the Palestinian people and all who continue to raise their voices and to shout out for peace and justice, for dignity and life abundant, for hope.

2 Responses to 'Grateful to be in accompaniment with Palestinians'