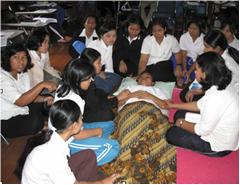 Deaconess students learn the meaning of prayer for healing

The Deaconess School of the Protestant Christian Batak Church (HKBP) in Indonesia is a place where “giants” reside. Jerry Schmalenberger, ELCA Global Mission Volunteer, describes the students there, some 60 of them age18-24, as “giants of compassion.”

Jerry goes there on occasion to teach homiletics, pastoral care and counseling, stewardship, church organization and conﬂict management. “They teach me real discipleship, life together, love of others, and humble service,” he says.

Jerry writes: “In the Mark 2 story of the bringing of the paralytic to Christ and letting him down through the roof of Simon Peter’s mother-in-law, it simply says that Jesus had compassion on him. It is a phrase that is used over and over describing Jesus’ ministry. These young women students and their teachers have that same exorbitant compassion for others. Their ministries are for lepers, blind, physically and mentally challenged, lame, grieving, ostracized, and the hungry. They are that compassionate Christ incarnate in the jails, hospitals with the sick and dying, the victims of volcanoes, earthquakes and tsunamis, and the poor elderly in their slum homes. They care for Sumatra’s orphans. They teach kindergarten. There is no job too dirty or humbling which they will not undertake on God’s behalf.

“They often come from the poorest villages and Batak families; but they are rich in faith. I serve them bread and wine and lay on hands for healing, celebrating the real presence of Christ; they go from their campus to take that real presence out into what is often a cruel world full of hurt and suffering.

“The early days were not as easy. When students ﬁrst moved into their quarters they were squeezed into a far too small facility. Without complaining they slept ﬁve to a room on three mattresses. Rice was cooked over a wood ﬁre out back. Now, because of the recognition of this school of giants of compassion, a new bus has been purchased, new beautiful classrooms constructed, a computer lab built and furnished with the latest technology and a theological library opened.

“While Deaconess schools in Europe and America are closing and simply drying up, this one thrives! If I were to select a hymn that best represents these God’s children living together, it would be my ordination hymn by Frederick W. Faber: ‘There’s a Wideness in God’s Mercy (like the wideness of the sea).’ Verse 2, as I would paraphrase it, would be: ‘…there is no place where earth’s sorrows are more felt than in HKBP’s Deaconess School. There is grace enough for thousands of those who need it most.’

“And if I could choose scripture that best ﬁts this God’s Eden it would be the Beatitudes in Matthew 5. The description of Jesus as High Priest in Hebrews 5:2 describes them as well: ‘He is able to deal gently with the ignorant and wayward, since he himself is subject to weakness.’”