Posted on December 3, 2010 by Franklin Ishida 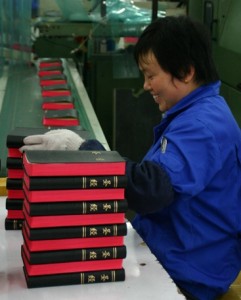 Millions of Bibles come off the press each year in Shanghai

The Amity Printing Company (APC), located in Shanghai, China, recently celebrated the printing of its 80 millionth Bible.  The event highlighted the importance of the Amity Foundation’s continuing Christian vision and values. This event also marks an important occasion, as the APC has scaled up their operations in the last 3 years, printing 10 million copies of the Bible for domestic and international churches each year.

The official speeches focused on the importance of the cooperation between international and national churches in making this occasion possible. Mr Qiu Zhonghui, the Amity Foundation’s General Secretary, introduced the event and highlighted three important services supplied through the APC. These included increasing the cooperation between the Chinese Church and Christian society in China with the objective of printing Bibles, involving international churches in the Chinese Christian movement and reaching the Chinese population with the Bible’s and the Amity Foundation’s message of love and charity.

International partners highlighted the historical background for the APC and the connection to the TSPM, with the representative for the United Bible Societies commenting that ” all of us today are celebrating a miracle”. The APC therefore demonstrates the importance of faith acting out love both through practical and spiritual nourishment and knowledge.

APC was founded in 1987 as a joint venture between the Amity Foundation, an independent Chinese voluntary organization, and the United Bible Societies. It is the world’s largest Bible printer and 75% of the Bibles Amity prints annually is sold inside China. Most are in Mandarin, but editions  in several ethnic minority languages are produced as well as a paralel Chinese-English version.  In addition, APC produces Bibles in other languages for export. Domestic Bibles retail for as low as $1.20.

Early in the history of APC, the ELCA had provided funding for the purchase of paper. Paper of the appropriate quality for Bibles was not available at the time in China and had to be imported from abroad at a higher cost. Since then, APC has spearheaded efforts to produce better quality paper domestically in China, thus reducing the APC’s reliance on outside assistance.

(Parts of this entry were taken from news from the Amity Foundation.)