Bradn Buerkle is an ELCA missionary in Novosibirsk, Russia. To support Buerkle, or another of the ELCA’s nearly 250 missionaries, go to www.elca.org/missionarysponsorship. 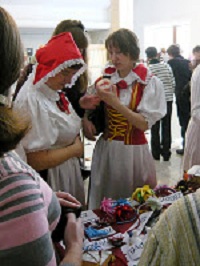 Despite the fact that at least 90 percent of those Russians who celebrate Christmas do so on Jan. 7 (due to using the Julian rather than Gregorian calendar) that doesn’t mean that the country is far behind the West when it comes to preparing for the holiday season. Christmas decorations have been up in some stores since early November, and Christmas trees are starting to go up in squares and parks around the city. Here are just a few reasons why it’s beginning to look a lot like Christmas.

Snow:  After many years of freezing rain and slush in St. Petersburg at this time of year, it is a bit of relief that we know that the snow is here to stay until April or May. And shoveling snow from the church courtyard has been a good way to work off frustration, I’ve found — though I’ll admit that by spring I might be feeling differently.

Christmas bazaar:  This past weekend, the local German cultural center (together with the German consulate) hosted their annual First Sunday of Advent Christmas Bazaar. Our congregation always has a table there were we talk with the guests (there were over 1,000!) and sell crafts and baked goods. We had fun and raised a bit of money for the church, which the council intends to use toward repairing our building’s foundation next spring.

Midweek Advent services:  I decided that for Advent, I would start every Wednesday with morning prayer and end with evening prayer, inviting congregational members to come at any time to pray together or just to talk. It is still too early to say whether this will meet the spiritual needs of those in the congregation, many of whom live far from the church, but yesterday morning a few of us did pray together, followed by an almost hour-long hymn sing. Fellowship time is important, so I hope that people continue to come.

“Miracle”: “It’s the most wonderful time of the year.” “Wonder” in the sense of “miracle.” The news organizations here lately have reported on the astounding number of people who have made their way to the Church of Christ the Savior in Moscow to visit the “the Belt of the Theotokos.” This Orthodox relic, supposedly woven from camel hair by the Virgin Mary so that she might wear it during her pregnancy, is usually found on the monastic mountain of Athos in Greece. In the past month, however, it has traveled through Russia so that the faithful could venerate it. When the belt was in the capital, lines stretched to incredible lengths, with reports that some people waited 15-20 hours and with more than 80 people needing hospitalization after standing out that long in the cold.