The Rev. David and Alicia Brondos are ELCA missionaries in Mexico. David is a professor at the Theological Community of Mexico, an ecumenical consortium of seminaries in Mexico City, which includes Augsburg Lutheran Seminary.  His work involves training pastors and leaders for churches throughout Mexico.  Alicia teaches English in Mexico City. To support the Brondos, or another of the ELCA’s nearly 250 missionaries, go to www.elca.org/missionarysponsorship. 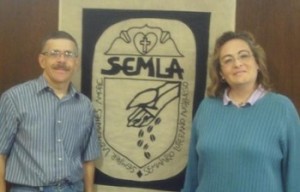 On August 20, at the meeting of the Board of Augsburg Lutheran Seminary where I serve as professor, the Rev. Angela Trejo was chosen to be the new coordinator for the seminary.  Angela succeeds her husband, the Rev. Dr. Moisés Pérez, who is now the dean (academic vice-rector) at the Theological Community of Mexico, the consortium of seminaries of which Augsburg Lutheran Seminary is a part. Angela is the first woman to lead  any of the seminaries that make up the Theological Community.

Among the things Angela hopes to promote as seminary coordinator is a greater participation of women in the programs and activities of the seminary and Theological Community. For example, Angela has been very active in the Mexican Lutheran Church Women’s organization and recently helped start an online magazine for Lutheran women called “Xaris” (from the Greek charis, “Grace”).

Besides continuing to do research on women in the ministry and helping teach and develop the seminary’s new online course program, Angela hopes to help the seminary become more involved in ecological issues from a theological and pastoral perspective.

Please keep Angela in your prayers as she begins her new responsibilities. I thank God for the many gifts she brings to the position and the passion she has displayed for the work of the church, especially promoting ministry by and among women.